An early and cool start, with the wind blowing.

I settled on a day trip to the Lower Salmon Creek Bivvy so there was no great hurry. I could head down there, spent much of the day, then climb back up.

All that went to plan, and I even fitted in a couple of phone calls as I had been away from home for almost 3 weeks by then. Only a few more days to go.

My body was becoming weary, and my enthusiasm was waning.

The reason the track is marked as a route on the map is that DOC has abandoned maintenance, but fortunately, Frank King and Honara Renwick have taken maintenance upon themselves and are putting in the effort.

The strange horseshoe roof has been beautifully painted and the interior will also be done. This seems to be the way with DOC these days. They provide the materials, and the means to get them on-site, and the volunteers the labour.

Many windfall created obstacles on the ridge, but Frank and Honara have tunnelled around 20 or so fallen trees, and it is generally clear where to go.

Down in the valley was sheltered, and the heat was intense.

For me it was better climbing hills than going down them, so my return tested that theory. True that.

Plenty of wasps were in evidence with the honeydew in full production. Up in Nelson wasps have been more or less controlled with a specific poison that has been recently developed. It’s protein-based, and wasps are the only insects in New Zealand that feed directly on protein.

The Salmon hut book goes back to March 1984, although a year gap for 2006 entries was evident. Even now it seems a destination mostly for hut baggers.

Why would you go otherwise?

At least my excuse was that I document huts for my website, but then I noted my hut numbers are mounting on the hutbagger website. Not that I’m competitive! It is some incentive to try some new places and perhaps encouraged my visit, despite my body suggesting that it was time to go home.

Here is the truth about hut bagging. It’s easy at the start, but as time goes by, the low-hanging fruit is gone, and it becomes progressively harder. Then those most difficult-to-get places require dedicated trips just for a single uptick in your numbers. In my case having visited all the huts in Nelson Lakes, the Richmond ranges, Abel Tasman, and most of Kahurangi, the few left are Kakapo, Roaring Lion, and Johnson, which are not at all easy to get to.

After a lazy few hours lounging around in the sheltered heat of Salmon Creek, it was time to attack the almost 800 m climb back up Black Hill. In some ways, it’s easier for me to climb than go down the steep, somewhat slippery slopes, because I just engage a low gear and try to keep moving. Grind it out. Less stress on my knees.

Met a father and adult son who were out on a day trip carrying a packraft. Their idea was to head down Salmon Creek to the Waimakariri River, and cruise down through the gorge.

I mentioned that the 3 km of creek included at least two waterfalls they would need to climb around, something I picked up from the Salmon Creek hut book that I had extensively perused.

“Oh, this is turning into a bigger expedition than anticipated.”

Dad was looking less enthusiastic, despite not carrying as heavy a pack.

Meanwhile, by the time I reached the top of the climb, the clouds were rolling over the ridge, and while the West Coast direction had bright sunlight, where I was heading was dense cloud.

A guide to the night’s accommodation: Black Hill Hut 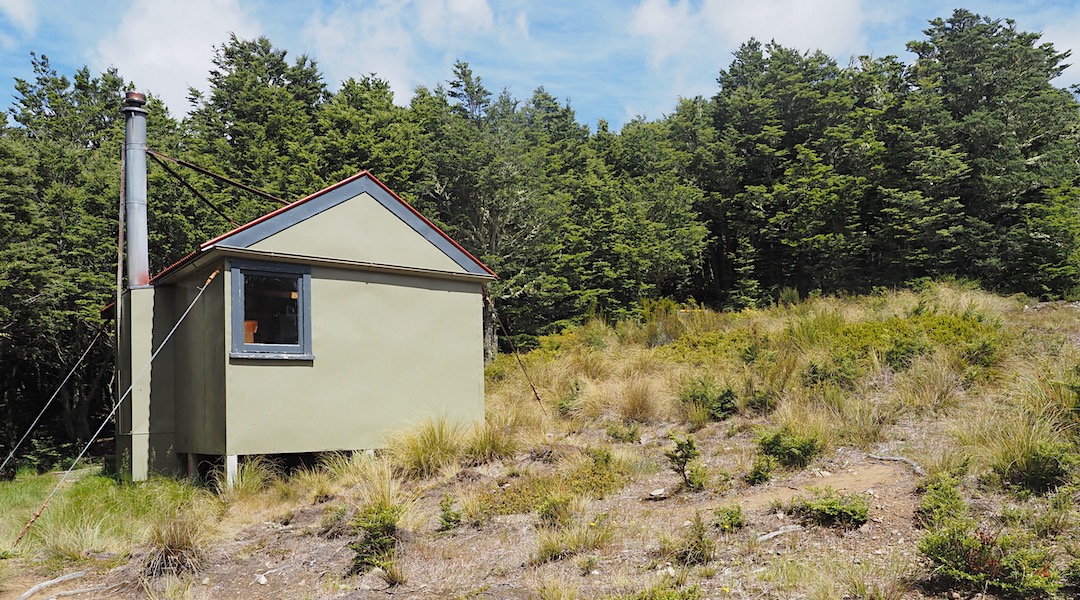