My seventh big tramp for the year?

Yeah, I’ve been out and about.

71 nights in total, if I include the full Blenheim to Kaikoura trip that started on 22nd December last year.

Now launching out into a full summer tramping season.

Plans are for an initial fortnight-long trip closer to home to visit a few huts I visited in my youth in Nelson Lakes National Park, and a few around the eastern periphery.

Then spend a month or more down south.

Last year I was washed out with the two cyclones Fehi and Gita, and that dampened my enthusiasm.

This year I’m more optimistic that the weather gods will smile. I’m also going to sit out any poor weather, and then smash on.

The logistics of the first trip is easy. Carry everything I need, and return home for replenishment.

After that? Don’t know.

Public transport would allow the flexibility of one-way trips, but I’ll be ending up carrying battery chargers, plus everything I need for surviving in civilisation as well. I guess I’ll be posting myself things further down the line.

In the meantime the weather ain’t exactly optimal. Other than a few days of summer in the first week of December it’s been mighty unsettled for months.

Let’s hope that’s about to change.

Here is the map from the trip. If you click on it you can look at any section in great detail. 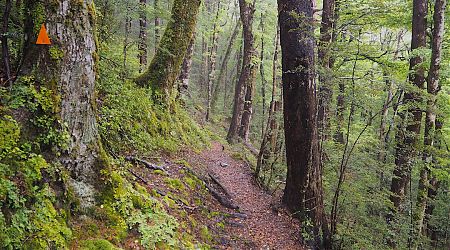 I took up residence on the veranda with the sandflies, and once they went to bed, on sunset, a possum took their place in the harassment stakes, albeit concentrating on some loose plastic bags, not my skin. 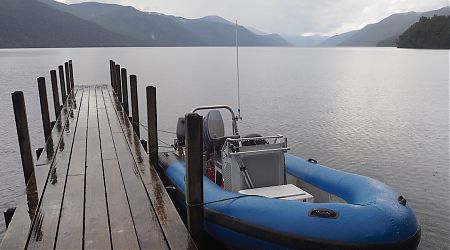 Then it was the full Festival of the Root on the giant sidle around the slope. 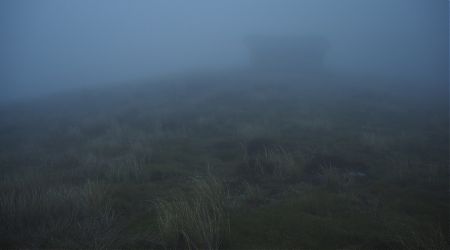 A few more paces, the gloom lifted momentarily, and I’d almost walked into the hut wall. 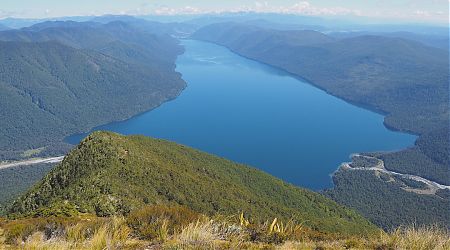 Destination Tiraumea Hut. But it turned out to be a kind of down, and up, and down day.

Day 5 | Tiraumea Hut, a night with a hunter 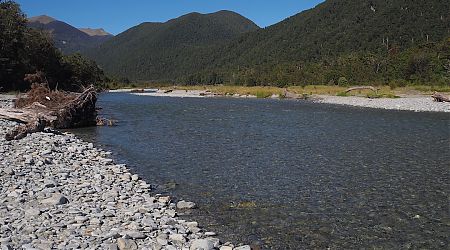 There was a preponderance of sandflies who elected to join me, without consultation first. I would have declined their company, having decided early in my tenting career that I preferred solitary company, at least when in my tiny one-person tent that is barely large enough to house myself. 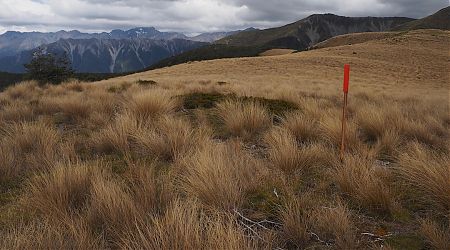 Out here you notice that you have a body as well. 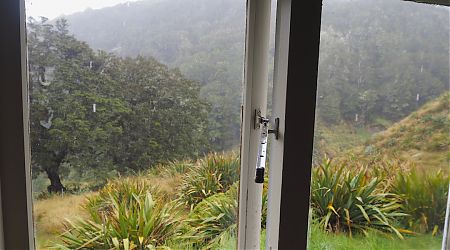 Thunder in the distance. Heavy rain on the roof. 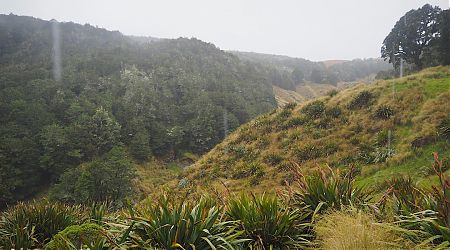 I finish reading a book on my small screen iPod, and hope tomorrow is in fact brighter.

Day 9 | Downie Hut, and wet behind my ears 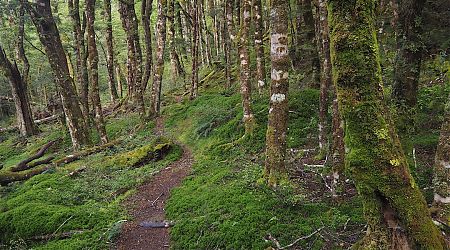 Fortunately, once at Downie I went for water down to the main river, spotted a yearling hind myself, then applied myself to the woodpile, a firelighter, and a found box of matches, and soon had quite a blaze. 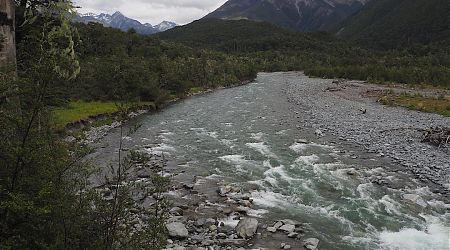 The rat decided on being elsewhere, and the stoat followed suit, leaving me in peace.

Later Mr Stoat looked in through the open door. 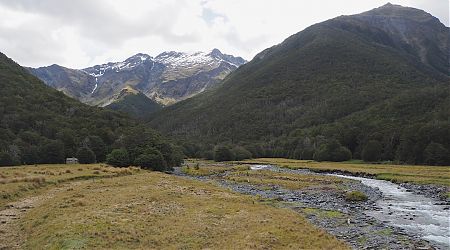 Task for the day: Have a shave. 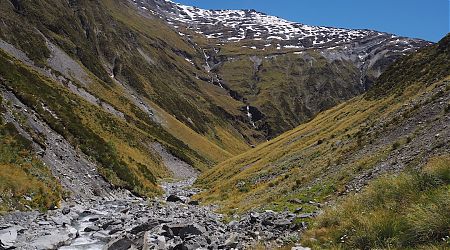 You practice for the big days. It looks like all the earlier effort has paid off. This was a Big Day.
http://tramping.net.nz/textpattern/index.php?event=article&step=edit&ID=1080 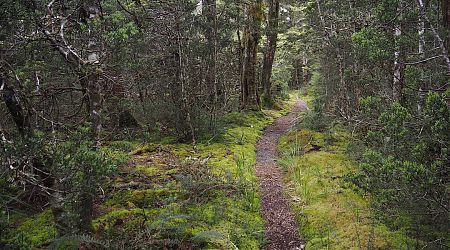 The major sight of the day, other than the south face of Gloriana where only the lower slopes were visible, was a pair of Paradise ducks with five ducklings of the extraordinarily cute variety, barely the size of a fist, and totally fluffy with their first feathers. 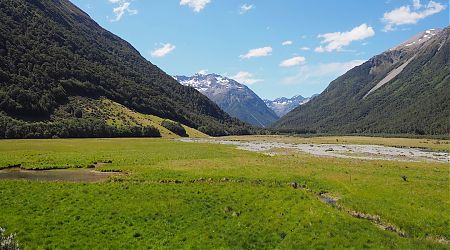 I had my Lawrence of Arabia headgear on for sun protection as I walked up the Waiau Valley, rather than for keeping the drizzle off my glasses that was required yesterday. 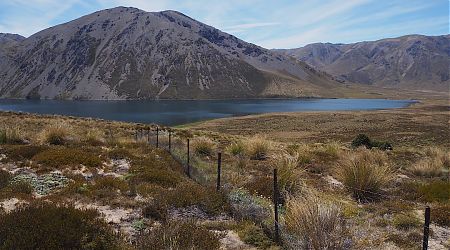 I slowly packed up while eating breakfast, and watched a little peloton of four trampers crack on down the valley looking insectivorous with their twin long walking poles clicking in action. 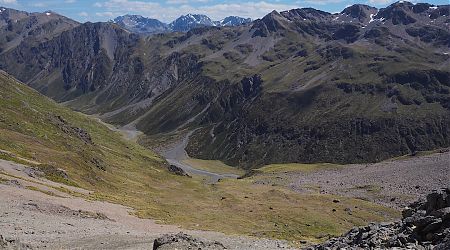 The day’s task is easy: up the valley an hour or so, up over the Paske Saddle, not even a 600 m climb, and then down the other side to the hut. Yeah, that sounds easy enough. 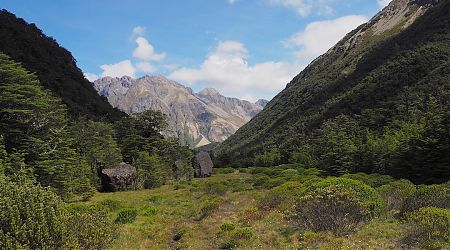 Wasn’t long before my coat was off and the sunscreen on, although it was not quite as cloudless as some of the previous days. 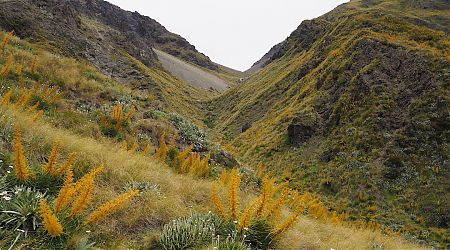 It wasn’t as spectacular as Paske Saddle, but the valley was tighter, with very rugged peaks on view, cliffs, rock falls, avalanche trails, etc. A field of speargrass. Big rocks in streams, or precariously perched halfway up slopes.

Day 19 | Finally back home in Nelson 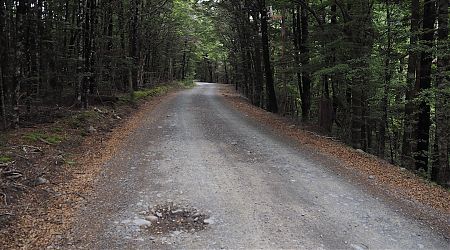 I was happy to spend a little time trudging down the dusty Rainbow Road. A little of something can be a good thing.