Tramping during a pandemic can be disrupted by lockdowns.

Fortunately, I was left alone on Rakiura after a Level 4 lockdown was instigated when I was already three days around the North West Circuit. I stayed on the island until Level 2 was reached, and that allowed tramping officially once again.

Despite my two recent excursions, the South Coast Track, 12 days, and North West Circuit, 21 days, I am a sucker for more punishment. I don’t believe I’ll find it easy to explore the Monowai area.

I had a look at the DOC stated tramping times, and it looks like it might be gnarly. I have plenty of experience in recent weeks with mud, and also muck-on-a-slope, so hopefully it won’t be excessively hard.

I was thinking ten or so more days, although Rodger Inlet is a cul-de-sac to begin. I’ll be taking a lighter pack there. Only a couple of nights’ food required.

After that, it’s up over a saddle on the way to Green Lake, then it’s all downhill to Monowai Hut.

That itinerary will continue with my overview of Southland tramping.

And yeah, I’d give the Lake Hauroko tracks a look, but at this time of year those nine-hour days are too much. For other reasons, snow and avalanches predominantly, the Dusky Track is unavailable.

I’ll be back for those during summer.

In the meantime, I’m investigating Lake Monowai, and I have no idea what It will be like. Two deer went on a semi-circle around me, with a 40 m radius. As soon as I spotted their movement I stood still and had a good look at them as they trotted around in the semi-open forest. Well, at least I knew what was ahead. The bad couple of hours to begin, first on a slope with windfall crossings, then in the mud zone. 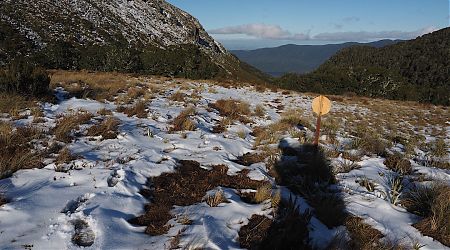 Surrounded by snow, being at 827 m officially, the hut wasn’t quite warm inside, but some dry clothes, two cups of soup, and a snuggle in my alpine-style sleeping bag with some delicious dehy food warmed me up. 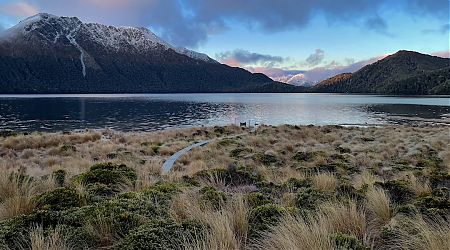 I leapt from tussock to tussock for a while to avoid the deeper recesses of the quagmire, and eventually, I made it back to the A Frame, somewhat before dark, but not before drizzle started. Much of the walk is sublime, although plenty is around or over those windfalls. The often sunless southern slopes in the forest is relatively damp feeling, even when it’s not raining. Plenty of moss to start, and eventually, it gets into crown fern once more when you get down lower. I was also up early with the crazy idea I might be able to walk to Borland Bivvy for my day’s outing. It’s not like I haven’t been training for this for the 50 days I’ve spent tramping in the last three months. Having to back up one of my main days of energy expenditure with a second immediately was a tough ask.