The day’s objectives had a radical rethink.

When I sprang up, just after the 6 am news and weather, it was completely clouded in, and a helicopter was spraying weeds in close proximity.

I packed up my sorted gear and left early enough, ie, before 9 am. By that time the cloud had almost completely disappeared and it was totally calm.

I wandered alongside the mirror-like canal bringing the water from the Wilberforce River to Lake Coleridge for hydroelectric power generation. Thought I check for an Internet connection and found I could swap messages with various people, and get an up-to-date weather forecast.

Rain in five days. 30 mm, which is enough to make a difference when you are crossing big Canterbury rivers.

That made me change my plans and reverse my previously thought-out trajectory. Now seemed sensible to head to Moa Stream, as this won’t be negotiable following a deluge. This route is mostly zipping up bouldery rivers and I can be on the appropriate side of the substantial Wilberforce River, the true left, on my way out if required.

After 12 am, I was picked up by James and another in a four-wheel drive, and some room was made for me to bounce my way until opposite Moa Stream. That cut out about 4 km of walking up the vague four-wheel-drive track, ie, an extra hour that would have proved much harder at the end of the day.

At this point, I had to cross the Wilberforce River, easy enough with the water level so low, but first I had to get through the matagouri scrub. I pointed directly to Moa Hut, an old musterers’ hut with graffiti from 1928 and the 1930s. Sheep and cattle are now required to be fenced in paddocks so no longer roam the areas near waterways since the government converted many high country leasehold properties to much smaller freehold properties. Areas like floodable river flats are now administered by the Department of Conservation.

I found the Moa Hut couch surprisingly comfortable so settled in for an hour or so, not realising I had two hours more of rock hopping.

Had already crossed the Wilberforce River in a number of braids, but none were up to even knee height.

Moa Stream required a few crossings as well, but mostly it was rock hopping, even on the flats that were covered in part with mini tutu.

Another empty hut, but it has an issue with water. The open-topped barrel was a festering murk, and it was a 200 m trip down to the river with a plastic bucket, then 200 m back over the boulders, hoping the handle wouldn’t fall off.

Man, I was tired. Dropped to sleep while it was still light.

It was well dark when the door opened and two hunters came in.

Not staying. They left.

Two different hunters then came in. Also not staying.

Just as well, as I had occupied much of the horizontal surfaces.

Once again back to sleep.

Then, the first lot reappeared, having shot a deer and were lugging the meat. I reallocated locations for my gear.

Not sure of the time, but in the morning they were gone by 5 am. They said plenty of deer were around, not far up the tributaries.

We chatted for a while, but eventually, we were all, finally, asleep.

A guide to the night’s accommodation: Moa Stream Hut 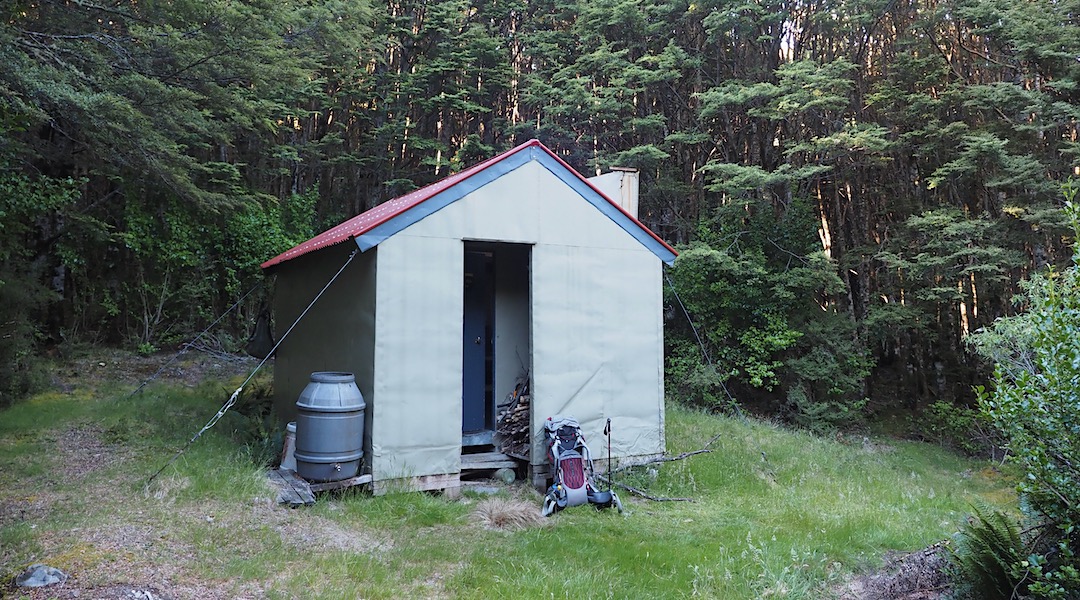