Woke early despite the hunters’ quiet movements, but after making breakfast I returned to my sleeping bag to scoff it.

It was so early that I packed up and left around 8 am.

The hunters had gone up North Stream which was on my itinerary. From there, I would go over Moa Saddle and then drop into Unknown Stream.

The first section of North Stream was the steepest and needed me at one stage to remove my pack, toss it up on a rock, with me following.

By 10 am I was past Third Stream, and at the site that the hunters had chosen to camp for the night. I caught up with the guys just before 12 pm. They had seen 13 deer, all before 9 am, but they had been too distant to get a decent shot.

Near the pass are two tarns, but I wasn’t desperate for water, despite the stream not having flowing water for the last 2 or 3 km.

The valley became easier and flatter as I went on.

From the pass, a great view is offered down the Unknown Stream valley which is many times the size of Moa Stream valley.

That doesn’t sound a lot.

Now the real fun part of the day started.

First, a slog up a rise not far away, and then another. This was accompanied by some skirting of bluffs I was needing to circumvent.

Plenty of markers, and I headed downwards in a hurry, albeit in the direction of a narrow spur.

Somehow a marker had fallen down a scree slope. That looked like a fun way to get down, and I followed that, maybe not the first person to do so. I dropped about 60 m, then it ran out with no more markers apparent.

I could see I wasn’t too far from a gully that I’d read about in the Moa Stream hut book.

I got to the point where I was really entangled, including some bush lawyer. Fortunately, my small folding Japanese saw was at hand, and at some stage in the future, some other wayward tramper may be surprised to see the path has been cleared for the last 5 m to the shrub-free, but fairly greasy watercourse.

Once again it looked like I was on a path that others had travelled, but eventually, that path ran out into more impenetrable scrub. I took to sidling that now was slightly more open, but no less steep.

Then I spotted a marker 50 m away in the direction I was going. I just needed to get through that 50 m of undergrowth.

Much relief when I made it back on the track. Down to cross the gully once again.

The track, too, was steep and soon the marker indicated it was time to climb another little spur. Plenty of fern to obscure footholds, but it wasn’t long before I was sitting on stones down on the flat and overlooking Unknown Stream, and it was all over.

After yesterday’s full 29 km effort, and today’s, it looked like Unknown Stream Hut would be as far as I needed to go for the day. Just another hour rock hopping.

The hut was empty.

Once again the water was a major distance from the hut and I had to go down to the stream about 250 m each way.

Another early night. Hopefully, a decent sleep, not punctuated by others coming and going.

A guide to the night’s accommodation: Unknown Stream Hut 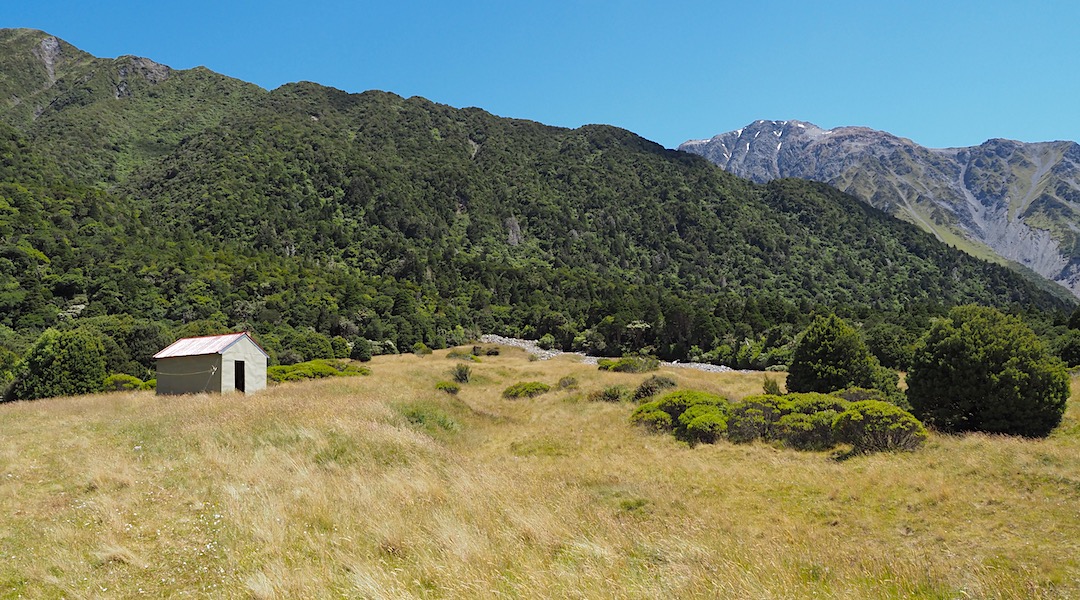