That’s the West Coast for you. Living up to preconceptions.

The last few days have been wet. The only three north/south highways in the South Island have been cut. The West Coast Highway is impassible both sides of Franz Joseph township. The two Canterbury highways are flooded by the Rangitata River.

I heard a report that the Cropp River weather station in the hills behind Hokitika near where I am had over 1000 mm of rain recorded in three days. This is all on top of the huge March 2019 storm that knocked out a bridge on the highway between Franz Joseph and Fox Glacier for three weeks.

Strangely, it is finally sunny weather. Shadows can be seen.

I’ve been sitting around for a few days, and after my truncated tramp on the new Great Walk, the Paparoa Track, dealt to by a major landslide, I’m raring to go.

DOC tracks and swingbridges seem sensible, despite four days fine weather predicted. No rain whatsoever, although there may be a passing shower. Then, a couple of days rain, but not too bad.

I will be carrying ten days of food. That will give me some flexibility about what I get up to, because I will need to go in and out the same valley.

Much of the Styx River track near the road was washed away in the March 2019 floods, and it’s certainly not an easy river to cross.

Tramping on the West Coast can be tough.

Narrow, steep, boulder-filled rivers. Bluffs to climb around. Washouts and windfalls to negotiate.

Let’s hope I don’t have too much adventure on this Little Adventure. 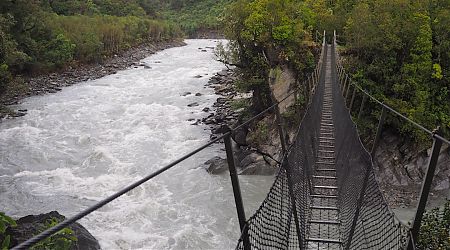 It was a surprise to find an old pack track on the other side of the Cesspool swingbridge, but, as expected, the track was washed out probably half of the time. That meant a great deal of scrabbling about crossing tributary creeks, and down at the water level rock-hopping under some nasty loose cliffs. 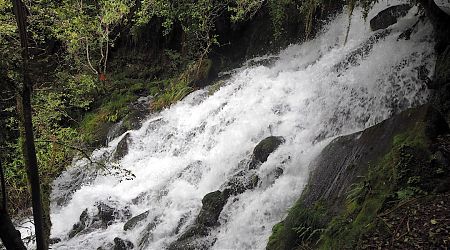 Three more steps were required, but with the agitated water I couldn’t work out where to put my hands and feet. The raging water dropped from that point more vertically, and it was clear that somehow my head was going to take the full brunt of the water flow. 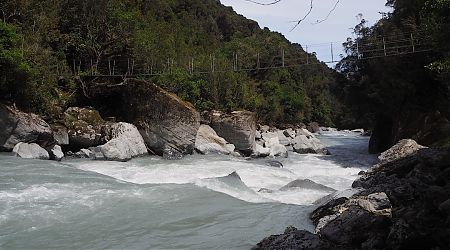 The track was fully benched in the 1860s by gold miners, or those that arrived too late to make money just picking gold up the ground. Instead it was backbreaking pick and shovel, and not inconsiderable quantity of dynamite. 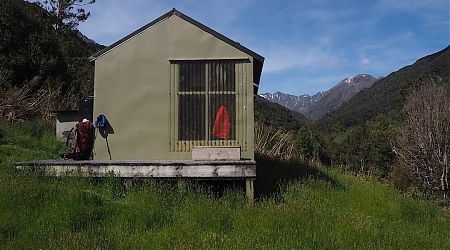 One of the impediments to rapid progress on an otherwise reasonable track was an avalanche chute, where each side of the recently piled round boulders needed to be negotiated. Severe danger of pulling a truckload of unstable rock down on your head. 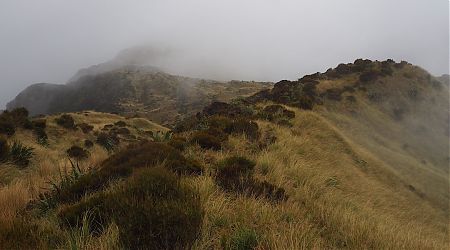 Yesterday I was killing flies and sandflies in the warm hut. Today it was rain streaming down. 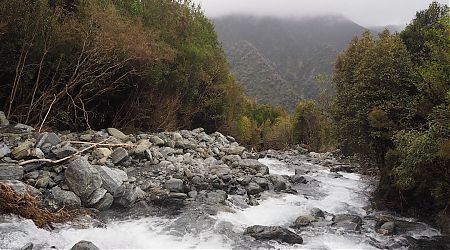 I know, I’m not making much progress. 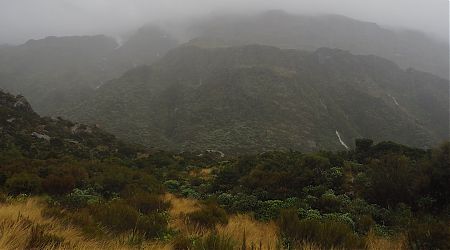 By the time I spotted the swingbridge the rain was steadier, the clouds shrouded the hills. A few waterfalls were doing their thing with increasing intensity. 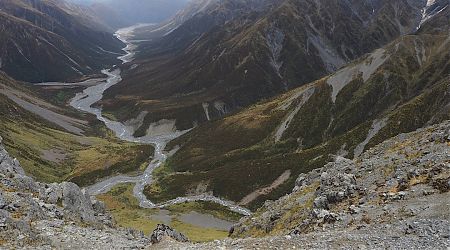 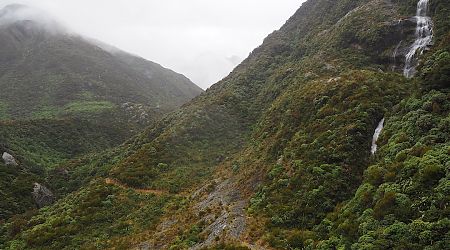 Some evocative views of cloud fringed ridges. It sure is inspiring territory. 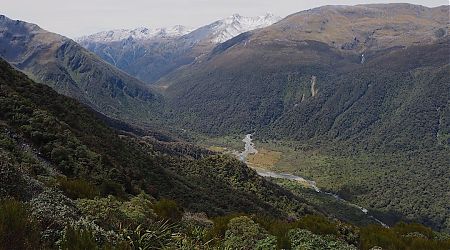 Decision made: the Scenic Route. 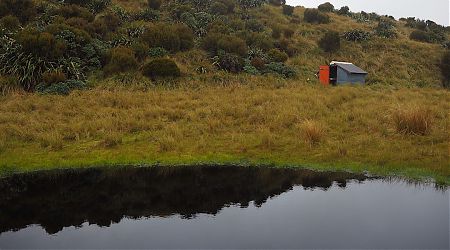 Every now and then the wind/rain/sleet combo would die down a bit, then after a short lull it was back with the full orchestration. No fun being out in that. 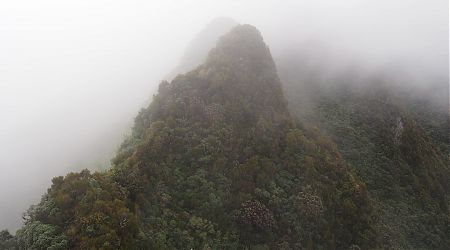 Tough day in the office. A mighty rollercoaster along a razorback ridge, with plenty of ups and downs. 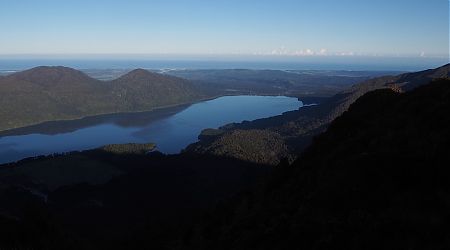 Steep? That’s either hanging on to various bits of twiggy vegetation, or skating on my arse. I took my time, and later noted I wouldn’t be able to wear those shorts in polite company in the future.