In the end, I did plenty more than anticipated.

My tent was left up, but even then it was 9 am before departure for my daytrip to South Temple Hut. No pack and my lightweight boots for a change. A day trip.

I wasn’t sure what to expect as the signage stated three hours, but the valley floor was flat, and didn’t even rise 100 m over the 7.5 km to the hut. And the track was well beaten, mostly, and didn’t have much to slow down progress.

I stopped to look at a self-resetting trap that had two possums beneath. That one worked, but I didn’t check the others which were even further away from the track, I guess to not shock the campers on a day walk who don’t need to see the actuality of pest control in action.

Some avalanche tracks were crossed, including in the forest where the undergrowth was stripped bare, and recent large rocks rested against trees. Parts of the south side of the valley had been burnt off, so was tussock covered.

The walk starts and finishes with river crossings: the North Temple Stream that washed my boots and socks, and near the hut was a deeper crossing.

Compared with my excursion to Maitland Hut, the experience was somewhat impoverished, and I’m sure the walk further up the Temple would be the interesting bit. But having had my early lunch I turned back before 12 noon, and made the decision to strike camp and start wandering up the Hopkins River this afternoon.

It was only a few minutes drive around to the Hopkins car park, and then, with the wind roaring down the Hopkins River valley I sorted my 12 days of food and gear once again.

So it was after 4 pm when I finally started with my heavy load up the four-wheel-drive track. I guess I could have taken the car a little further, but decided not to get stuck if rain set in before I made it out.

The section up to Monument Hut proved a real plod, but the more distant scenery was certainly spectacular. The mountains are jagged, and the peaks pointy.

An hour later it was getting dark. Daylight savings is really going to change the equation as we are past the Equinox now, and the length of day shortening in a big way each week. It’s hard to get organised in the morning when it was still pitch dark, almost, at 7 am.

A guide to the night’s accommodation: Monument Hut 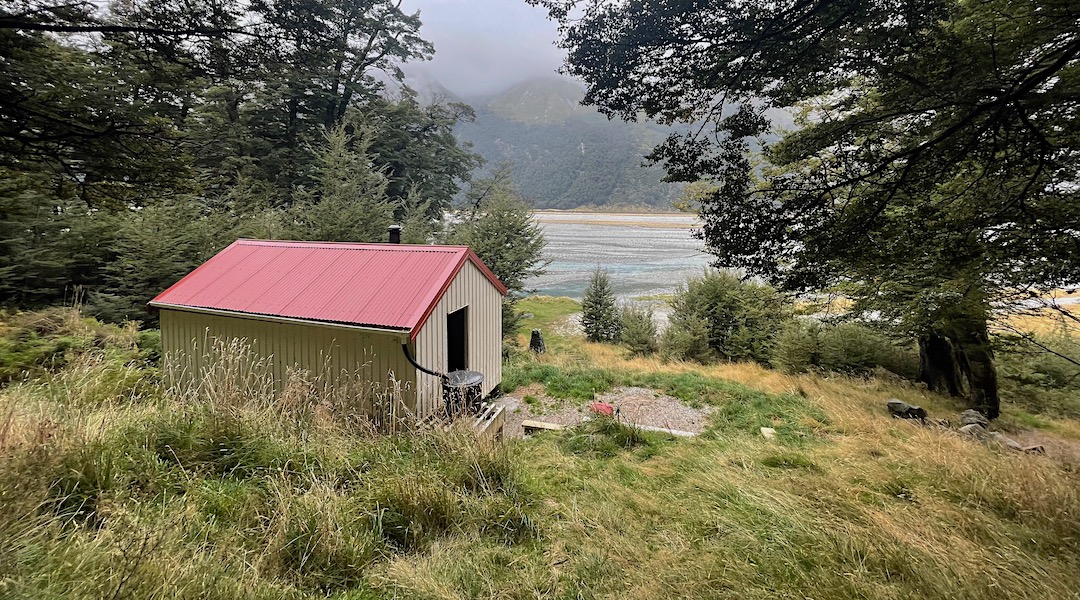