Early on from my bed in Twizel, I researched DOC’s webpages about the Hopkins and Dobson River valleys to get some idea of how long it might take me to go up to the end and back.

I worked out a tentative itinerary, then loaded my big pack with 12 days of food that could be eked out for some time longer if required, and was all set. Time for a decent breakfast in town, a quick dash to get some sunscreen now my years-old bottle was at a low tide, and, of course, then needed to stop in at the salmon farm just out of town to get the world’s freshest sushi for lunch.

Hang on, I was headed for a simple overnighter to Maitland Hut, and was coming back to the car the next afternoon, so that meant I dragged out my lightweight pack and only loaded my essentials. Two days of food, and no tent required.

The track to the hut has no signage from DOC indicating the start, but it does have a sign requiring permission from the farm manager to cross some private land. The phone number didn’t connect, so I trotted a few hundred metres down to the farmhouse where I was signed in. Legal for once.

This meant it was just before 1 pm before I finally started wandering up the farm road. Maybe I should have researched today’s destination as well.

It was a sunny afternoon and my sunscreen was put to work, with my Lawrence of Arabia headgear shading my noggin.

The farm road climbed up to 1100 m on a moderate angle. Three gates needed to be negotiated, and an hour later the first DOC pole indicated to me to drop down the hill from the farm road, then sidle around some extensive scree slopes. Then down the gravel to the forest edge.

That all slowed my procession considerably.

When I finally hit the forest edge I realised that while I was less than halfway, it would be dark when I made it to the hut unless progress improved.

As it turned out, it was a great deal easier in the forest, particularly when the river was reached and some sublime walking on various river terraces allowed stretching my legs.

The second half was way faster, and I had almost an hour of light at the hut. In any case, it should be easier returning tomorrow, as a lot is downhill, and I also know what to expect, and where to go.

I should sleep well with all the sunshine and oxygen today.

A guide to the night’s accommodation: Maitland Hut 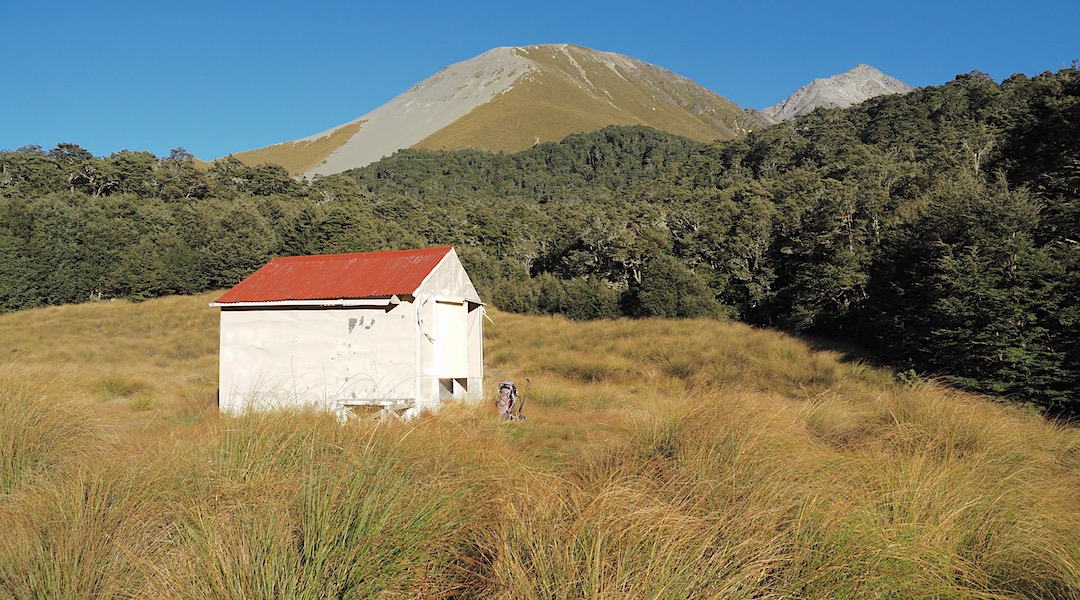