The cold permeated my bones last evening. I’d sat around too long in damp clothes, and sodden boots, and shivering set in before I even made it to my sleeping bag.

Dinner was eaten, but that failed to warm me up.

My toes were icicles.

At the Huxley Forks Hut a Federated Mountains Club article went through the recent findings about hypothermia. Just about everything I’d learned over the years apparently not only didn’t help, it took energy away from the core body requirement.

Getting warmed up by someone else in your sleeping bag? Bad, apparently, particularly if you have hypothermia.

The best thing, the treatment that actually works, is drinking warm, high sugar drinks. Your body knows how to use the energy it ingests in the right places.

My baggage didn’t carry much in the way of sugar, but I did have my super sweet muesli bars, so forced three down. 20 minutes later my toes were much warmer and I was ready for some sleep.

For some reason, I had grabbed four extra AA batteries rather than AAA, so my head torch was on rations. No reading tonight, and my radio is hit and miss these days.

So, in the morning, frost. It was the coldest my surroundings had been for a while.

My idea was Red Hut for the night, because it’s much nicer than Monument Hut, even though it will mean another hour or so of walking. I didn’t really thrill to Monument Hut, but Red Hut has a real history, and the two rooms help if others are there.

The trip back towards Forks Hut had its moments, but the big cliff drop didn’t faze me, and the drop down to the avalanche/rockfall chute was similarly not as big a deal as I’d originally made out. I picked out a path up the other side over the unstable terrain, but when I slid to the bottom, it seemed quite reasonable to just walk down the chute and continue on down to the main river half a kilometre away.

Too easy, although the boulders were larger, and the chute pretty steep.

But before I knew it, I was past Forks Hut, having bypassed it, and eating my lunch. Now, just along river flat for the next three hours, getting to Red Hut.

The Huxley River was easily crossed, but the surprise was the Hopkins River that had caused concerns a few days before had now almost disappeared. Bizarrely the braid that had given me the most concern was dry.

And Red Hut was empty, despite being a weekend.

The day worked out well. 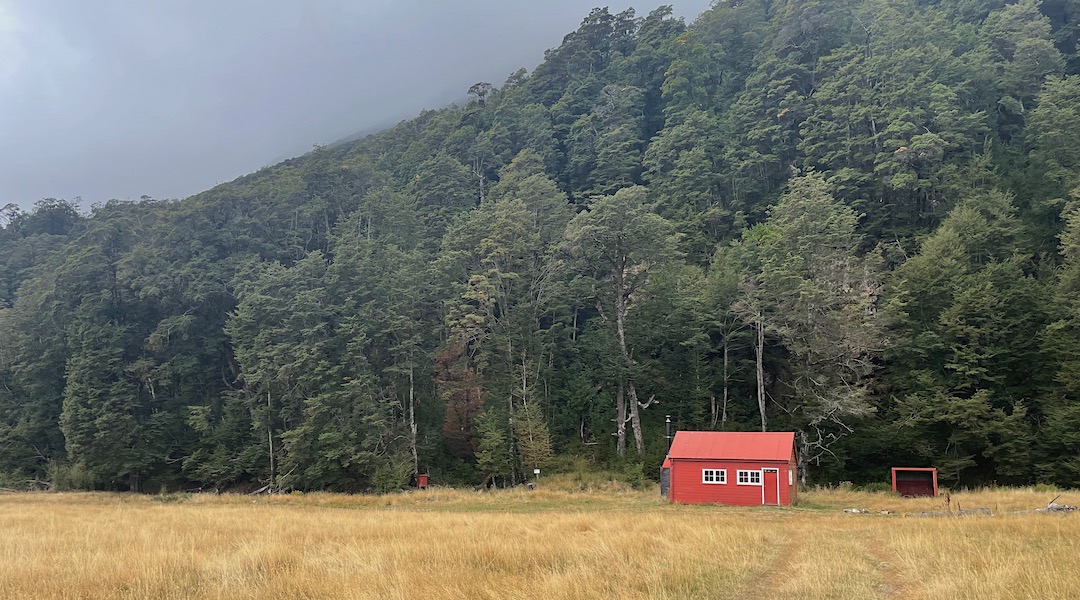