The radio weather forecast yesterday was for showers clearing. Well, they cleared all right, but were replaced by rain.

The night was punctuated with at least 40 lightning flashes, and accompanying thunder, quite the dramatic show that continued for a couple of hours.

Anytime I dropped asleep, either thunder or my mousetrap snapping shut on another poor rodent would jolt me to consciousness.

The view out the main window is up the Huxley, and that’s not yet out of the question. If I can cross the Hopkins River it’s all go, as there is no need to cross the Huxley River to make it to the Forks Hut.

Actually, the rain stopped as soon as it was light, and by 10 am plenty of blue sky was on offer. My plan was to leave around 11 am and head to Huxley Forks Hut given the favourable weather conditions, plus not requiring to cross any major rivers once I made it across the Hopkins.

One issue was that it was the colour of grey mud, concrete, so not possible to work out how deep it was at any point. Instead, I needed to find a wide section of each braid, and just give it a go.

Three times I turned back, sensing the water would be too deep, or too swift if I continued. Even knee deep with a bouldery bottom was too much risk of setting sail downstream, with my electronic gear having a bath.

The last of the seven braids was the most challenging, but the ripples on the fast flowing water was in fact due to shallow water for the first section where I got to a small island. Then the second required walking upstream, shuffling actually, while keeping two of my three point triangulation on something solid.

It was over knee deep, swift enough to get my walking pole vibrating disconcertingly, but the worst bit was only about 4 m wide, which meant by the time I realised the situation, it was as easy to continue as to turn back.

It took an hour from the hut to the point where I could safely have my lunch after all the dithering around. Might be easier when in a group and could link arms, rather than crossing on my lonesome.

That river crossing was up with getting through the Rakaia River for heart palpitations.

Then it was just plugging my way along the marked DOC track up to the Huxley Forks Hut.

The last of the previous occupants, hunters, had left on Monday, ie, two days before, so I had the place to myself.

My plan was to have a rest day tomorrow, maybe, depending on sleep, then go up to Brodrick Hut as a day trip. I’m not sure my body is really requesting a second day trip to South Huxley Bivvy, but maybe I’ll perk up after a decent night’s sleep.

A guide to the night’s accommodation: Huxley Forks Main Hut 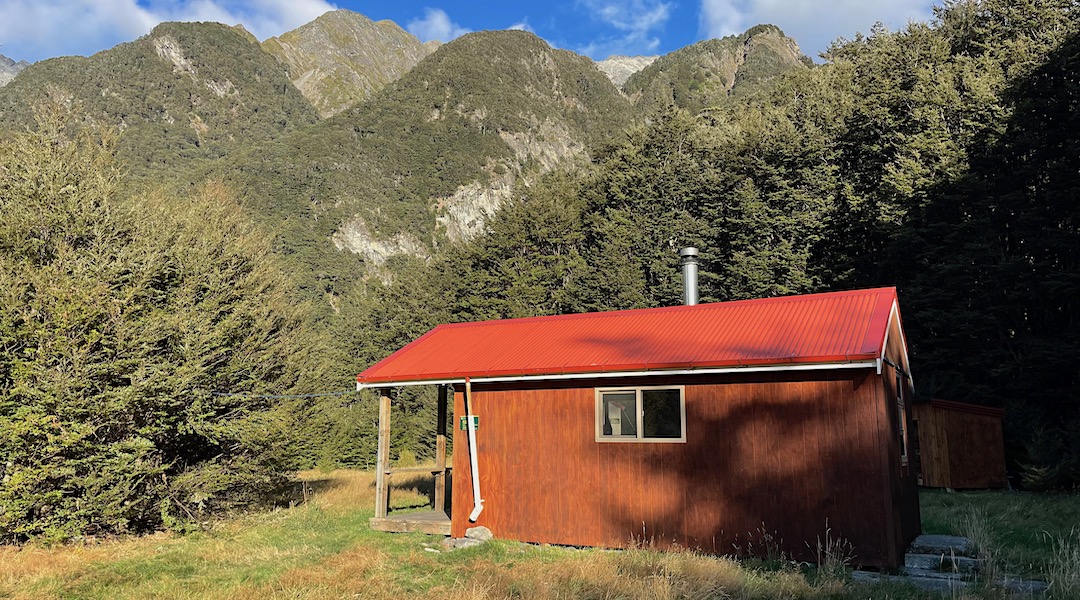