I was up at 630 am and watched the light changing on the hills across the valley. A little cloud hat ran along the top of the ridge and slowly dissipated.

I made some coffee and porridge on a cool autumn morning.

The photographer next door stirred, and I mentioned the marvellous light, but he wasn’t particularly interested and rolled over.

Despite being up an hour or more before the other two, they left before me. Off to camp at Mueller Hut for the night, then Queenstown the next, with dad back in Auckland the following day. When tramping, I meet a range of people, but I found I had much more connection with the hunter the night before, having surprisingly similar ideas about this countryside we live in, than with the urbanites. Even with the hunter I met in his four-wheel-drive later in the day, and we chatted away for 20 minutes.

Both of the local parties were really happy about where they were, and weren’t thinking about being somewhere else.

Frankly, I couldn’t think of a better place to be.

Sometimes, what is directly in front of your face is enough, and I really appreciated this most extraordinarily beautiful valley.

Eventually I strolled off, just an hour or so walk up to the Dasler Bivvy track. Not intending to stay meant I could leave my pack at the bottom of the climb.

Being very steep, one of the steepest ascents in recent years, you make elevation gain quickly, meant it didn’t take long to make my way up to the bivvy. About halfway up there is a steep cracked rock with a thick chain dangling down that you used to haul yourself up or down.

The bivvy is a delight, but was inhabited by the hunters with the numerous severed dear heads and antlers on top of the four-wheel-drive I saw yesterday. They were off somewhere on the tops attempting to add to their macabre vehicle decoration.

I ate my lunch, didn’t see the inhabitants, and descended.

On closer inspection that four-wheel-drive sure ponged as I scuttled past, and on up the valley. Actually, after the climb I rather dawdled, knowing I had all afternoon, and unlike the day before the day was almost cloudless. After yesterday’s fog where the other side of the valley was scarcely visible, the mountains could all be seen in their splendour.

Might as well appreciate my surroundings, so I sat on a huge log in the riverbed and took it all in.

No one at the hut, but the last two nights as shown that doesn’t matter as others can arrive at any time of the day or night.

So I’m sitting in my sleeping bag with a good book I picked up. No need for a fire.

A guide to the night’s accommodation: Elcho Hut 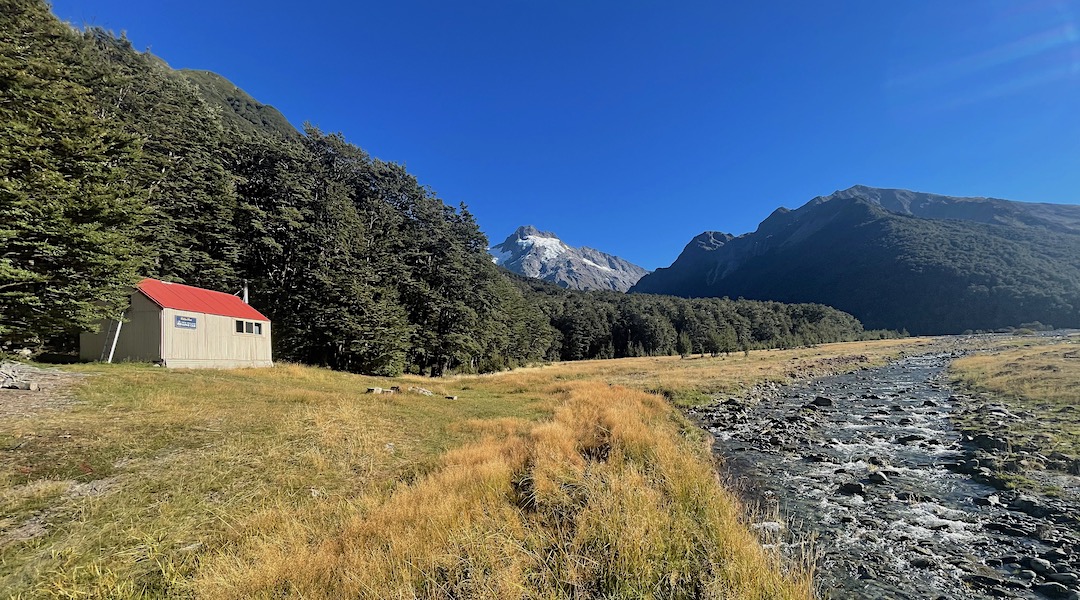