Some deliberation this morning about whether to just walk out, even go to Christchurch, or wander up to the South Branch Bivvy for the day. That would mean I could have a third night here at Forks Hut.

It’s Friday, however, and it is possible hunters could turn up. There was always the second hut here, it’s unheated, but built in 2007 its still pretty neat and only has two bunks.

As my porridge went down, I realised a third option existed. Spending a night in the South Branch Bivvy. Just three hours walking according to the hut book, that’s with my pack, so almost a rest day. I could then stay the next night in Monument Hut, or, alternatively, go back to Red Hut.

Not a cloud in the sky once again.

Being a sucker for punishment, Option 3 it is.

As it turned out, the day was a totally different experience from bashing straight up the river to Brodrick Hut. Much sidling at altitude above the river on an old New Zealand Forest Service benched track that has been let go by DOC. Some big slips and washouts to negotiate or climb over that weren’t as much of an issue as when this was a three-hour experience.

I spent much longer than three hours, but occupied myself with snapping twigs, and, I must admit getting off the track a couple of times and finding myself bush bashing for short distances on very steep terrain.

The tough bit was getting across one deep ravine where both sides had recently succumbed to gravity. A giant avalanche chute that took some adrenaline to power me up. Then onto a fully benched section that cut across a cliff face.

Dunno, am I getting too ancient for such activity?

Still, no one was home in the little doll’s house of a bivvy. The door is about 1200 mm high, so I crawled in. Not really built to accommodate 1.89 m tall blokes, except horizontally.

A great view was on offer of the glacier and 800 m cliffs of Mount Huxley. Not quite as fully spectacular as the Brodrick Hut environs, which had really surprised me, but still a gorgeous valley, for sure.

I didn’t think I’d ever be back, due to the barriers further down the valley. Just had to make sure to negotiate them safely on my way out.

Option 3 had turned out to be a bit different from what I had envisioned, but I was sure glad I came.

A guide to the night’s accommodation: South Huxley Bivvy 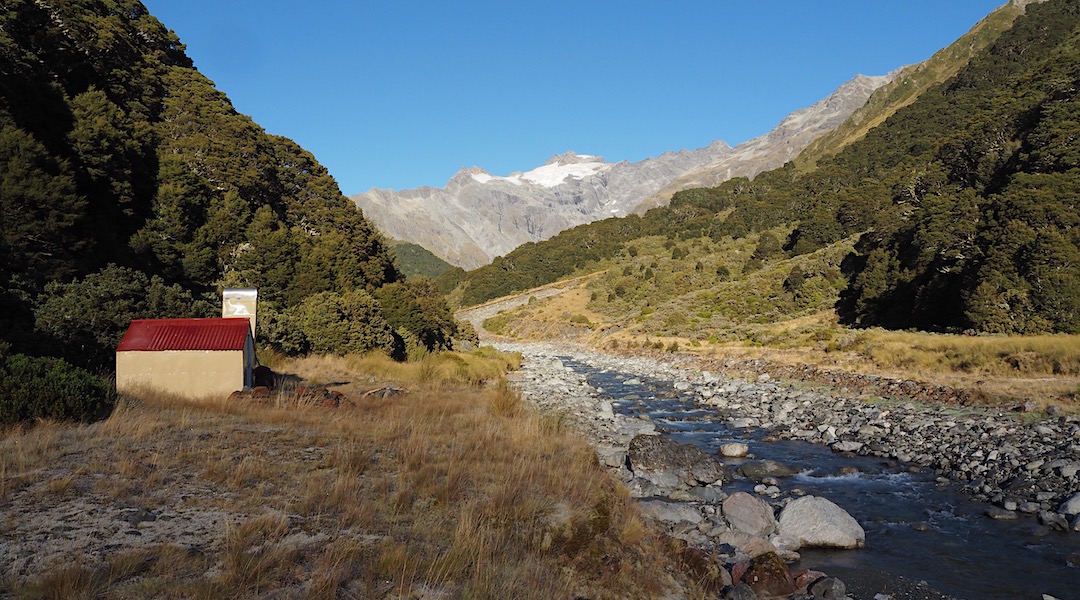