Camping in Fiordland National Park in September wasn’t so bad.

Hard to get out of my sleeping bag. Yup.

Fog over the lake, but after the 6 am radio news it was prudent to emerge and transfer seven days’ food to my bigger pack.

In the end, it was 9 am by the time I hit the track, with my first hour over the track section I traversed on both my two previous days.

Once at the turn-off to Rodger Inlet, the track condition deteriorated substantially, with plenty of damp patches and about 20 fallen trees at various intervals to get around.

My task was to climb from about 200 m at Lake Monowai to almost 1000 m at an unnamed saddle.

Yes, exactly what you might expect, although some occasional downhill parts at the start mean climbing is somewhat more. Also, some deeper mud for the unobservant.

Hint to novices: climb on the vegetation or tree roots, and steer clear of any obvious bog or sphagnum moss.

After lunch, I had a period of concern when I realised I had dropped my phone, ie, with my only map for starters, and not so old, and I had a 10-minute backtrack with a happy result. I felt I didn’t need the additional exercise.

Fortunately, my black phone had dropped from my top shirt pocket directly onto the track and was quite apparent, although I’d crashed through some close shrubbery en route.

About 700 m elevation snow started to be seen underfoot and occasionally dropping unexpectedly from the vegetation, and snow fully covered the ground when I finally broke out of the forest just after 900 m. I was damp, with any stopping getting cold in a hurry.

A DOC sign on the saddle stated a five-hour descent from the way I came, it had taken me seven hours coming up, with now only one hour to the hut. Supposedly.

That seemed improbable with the descent to Green Lake snow-covered, with big blobs falling from trees at regular intervals, and a few washouts and more tree falls to negotiate.

Then the hut appeared, just after sunset, and that’s always welcome.

Surrounded by snow, being at 827 m officially, the hut wasn’t quite warm inside, but some dry clothes, two cups of soup, and a snuggle in my alpine-style sleeping bag with some delicious dehy food warmed me up.

A guide to the night’s accommodation: Green Lake Hut 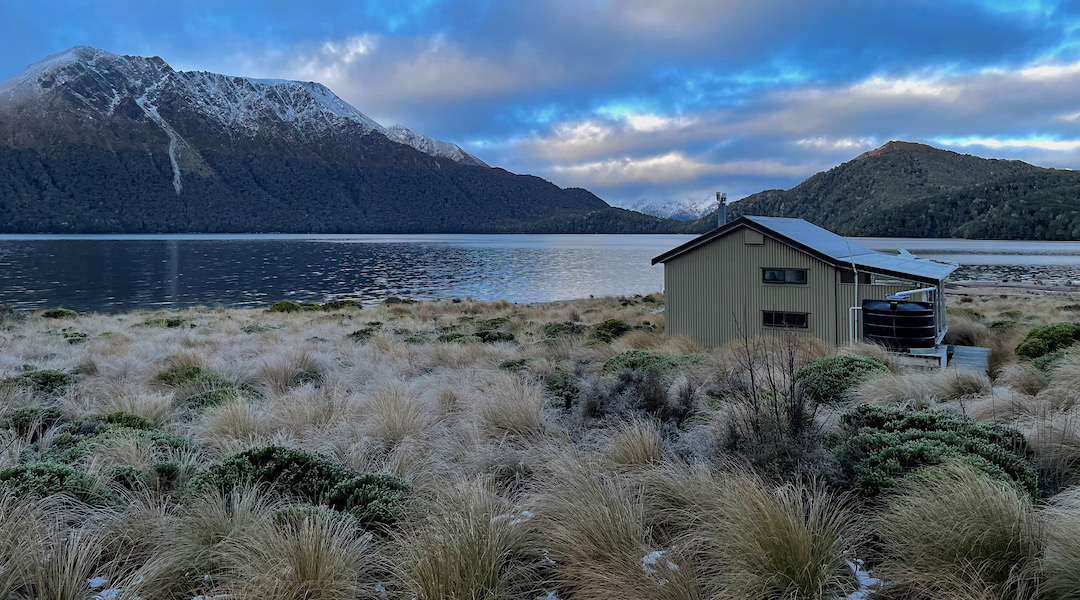