Rain was ominous when I awoke at 5 am and discovered serious rain was falling. Yesterday it had pummelled down, and the rainfall in the hills was at least 50 mm.

Dithering, I guess. Usually I’m more decisive but this rain is not very encouraging. On the other hand, it’s usually it’s better once you are out there.

By the time I’d eaten breakfast and was out on the road, considerable areas of blue could be seen.

Yesterday, I’d written down my itinerary, but with the heavy rain falling for much of the afternoon, I sent a message to my support team that I was going to drop Rodger Inlet, and head straight to Green Lake. The Walker River had a reasonable catchment, and with all the rain it might be up and too dangerous to cross.

But by that stage, I’ve already packed my small pack with food supplies for three days, with the extra day for emergency use if I became trapped by the weather. My plan was I’d swap packs, and install a food supply for a week once I’d made it back to the car park.

Except the DOC sign at the start of the track stated Green Lake was 6/7 hours and the sky was mostly blue, and so it was back to Rodger Inlet as my destination for the day.

If Walker River was up too much, well, I could always return. Then I could have an earlier start the following day and abandon Rodger Inlet as a destination.

It was easy and delightful walking over to Walker River, and through some outstanding mature forest. It is Fiordland National Park after all. The track is great for the first hour or two, with a beech leaf-covered clay groove in a full moss landscape. Gorgeous. Don’t mind walking in that.

First, two deer went on a semi-circle around me, with a 40 m radius. As soon as I spotted their movement I stood still and had a good look at them as they trotted around in the semi-open forest.

Second, the river looked ankle deep and easy to cross. A lot smaller than anticipated. At the point where the track crossed it was just under knee-deep, so there went my dry boots. Fiordland seems to have considerable ability to drain what was just another day of rain yesterday.

That didn’t matter as it wasn’t long before I was splashing along the track with another few creeks to cross, and the track wet underfoot.

Actually, the track became harder the closer I came to the hut. Windfalls to get around. Then windfalls on a considerable slope. Then on an acute slope.

Where the track had started very evenly, as the hut came closer, it became steeper, ending up cliff-like before dropping to the last once again gorgeous 100 m before reaching the two huts.

The old hut is about 2.4 m square with one set of bunks, but only one mattress. Taken for the main hut.

The newer hut is double glazed with six bunks and a view up the inlet. It’s also well insulated and rat-proof, and you can’t ask for more than that. It also seems to have been poorly sited as a caged rock levee bank has been built to divert the creek from flowing under the hut. This has unfortunately been undermined by the flow of floodwater and the grassy area in front of the hut has been covered in rounded boulders and pebbles of various sizes.

The hut was, of course, empty. Who would come here on a Monday afternoon? The last inhabitants had been a month ago, like many arriving with motorised transportation, in their case jet skis.

Wasn’t long before the woodburner was doing its thing, to excess, and I was drying out all my wet clothes.

Originally I had anticipated two nights here, but the long-distance weather forecast was suggesting very heavy rain in a week’s time that I could avoid if I cut a couple of days from my schedule.

No compelling reason to stay, other than it is a very comfortable hut, but having only just launched out on this tramp, there is no great imperative to have a rest day.

A guide to the night’s accommodation: Rodger Inlet Hut 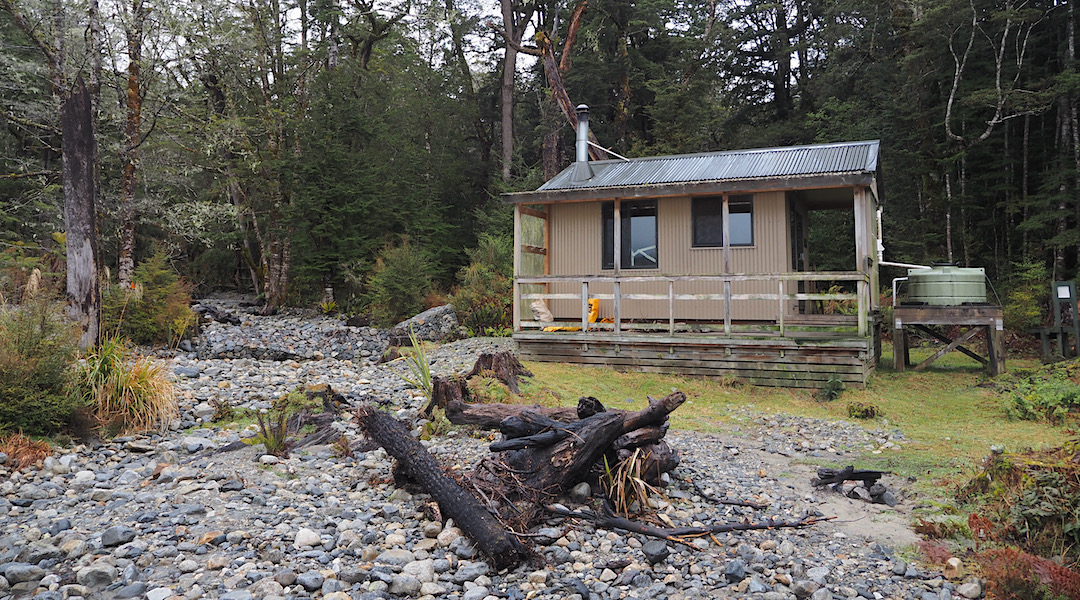