Heavy rain was noted at one point in the night, but for some reason I had the best sleep for a while. Ten hours zonked out, so I guess I must have been physically tired.

Some blue sky patches in the morning, and a decent view down the valley to some snowy mountains, but there is snow immediately adjacent to the hut, from the roof, so I guess it must be cold. Or, maybe that is piles of hail. Anyway, my toes are feeling it in my jandals when I went out in the wet grass for morning ablutions.

I could stand on the wet porch, or just sit on the mattress while I sipped my coffee.

Plenty of standing/walking later in the day.

The DOC sign states “2.5 hours” to Monowai Hut. I read in the hut book that there were 54 windfalls to negotiate, although that was some years ago and DOC has spent some time working on the track subsequently. But there would certainly be some new ones.

I can hear the stream nearby, and quite a few birds.

Oh, I saw a lone mohau yesterday in the tussock, and that was a plus.

As it turned out, the 2.5 hours was quite a way out. Four hours was more like it, and that is what the sign at Monowai Hut indicates at the other end.

Much of the walk is sublime, although plenty is around or over those windfalls. The often sunless southern slopes in the forest is relatively damp feeling, even when it’s not raining. Plenty of moss to start, and eventually it gets into crown fern once more when you get down lower. The fern makes easy walking somewhat harder, as you need to work out where the track is through the carpet, and also to look out for hidden obstacles.

Monowai Hut is perched on a clearing above the lake, and has a splendid view to the south. Steep hills and snow topped mountains.

South is also the direction of the cold wind blowing.

I gathered sufficient fuel to start a twig fire, for some reason there is no axe that the hut, but it wasn’t until I saw a boat heading this way I got it going.

After a month since the previous visitor, we now have both me and three fishermen on the same day. I find that a fishing competition is being held tomorrow on the lake, and there will be ten boats out.

I was thinking of hitching a lift, direct to the Monowai campsite, certainly the easier option, sitting on my arse for 40 minutes, but that really isn’t possible, and, after all I only have a couple of days to get to Borland Bivvy, and then another day walking 25 km down the gravel road in my boots.

So, three blokes, all out hunting and fishing. The beers were very easy to carry in the boat, but I turned down an offer on two separate occasions.

“Guaranteed I’ll be asleep in three minutes,” from me.

Plenty of conversation after dark, but they have an early start, and I’m already horizontal.

A guide to the night’s accommodation: Monowai Hut 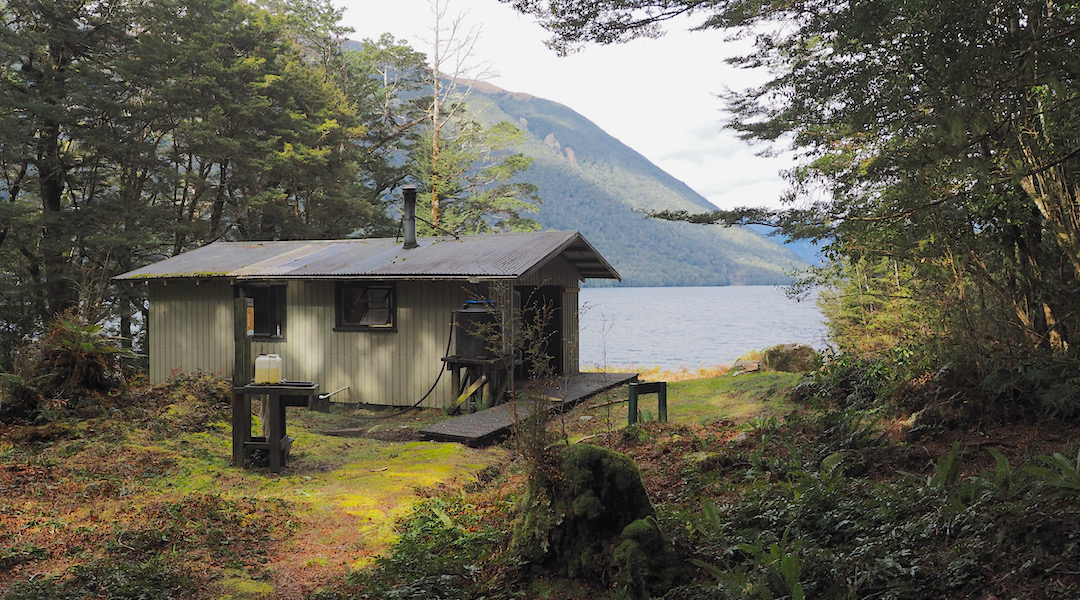