Frost on the walkway to the lake, and in the tussock, where snow was absent, but it wasn’t quite cold enough to freeze my wet socks that were hanging up inside, so that was a plus. Still, I produced big plumes as I breathed out while making breakfast.

No great motivation to get moving after three consecutive vigorous days. Those wet socks and damp clothes did not enthuse me to action.

It took until after 10 am for me to finally have swept the floor, and have my pack on my back.

Early on, some sunlight and I caught the glimpse of the distant snow mountains. It didn’t last. Instead, some drizzle around, and low clouds on the hills.

My day’s walk was fairly straightforward, with a few creek crossings, the deepest flowing out of Island Lake, but I managed to walk a greasy log without falling in.

My march was on a downhill trajectory, but on a reasonable surface. Not too rooty generally.

One surprise was a short section of tussock that brought back memories of the Takitimus, when on my northwards tramping of Te Araroa. Not the easiest to get through, not being able to see my feet, but I avoided the holes, and managed without falling over.

Plenty of recent deer tracks, like five minutes before I arrived at the hut, and I heard a deer bark without actually seeing it earlier on.

I missed the turn for the old Clark Hut, but it may have been removed. Later I found out it had been, because that route crosses a serious swamp.

For once I’d made it to a hut with reasonable daylight to spare, and that meant I could take the newly marked track to the old hut.

I saw two deer near the old hut, and they hung around long enough for me to snap a photo or three.

The old hut really needs a bit of love. Despite the ditches dug around the hut it does look as if the interior gets flooded on a regular basis. Built in the 1940s from local beech saplings and sheets of corrugated steel it doesn’t get much use these days, except by occasional hunters.

Due to potentially fading light I just traversed the swampy clearing directly, despite warnings about how ill-advised this was. Fortunately, my Stewart Island experience came to the fore, and I leapt from tussock to tussock for a while to avoid the deeper recesses of the quagmire, and eventually, I made it back to the A Frame, somewhat before dark, but not before drizzle started.

No surprise that I was early into my sleeping bag once again, because there is not much to do in the tiny shelter.

No seat. No woodburner. No real windows.

A guide to the night’s accommodation: Clark A Frame 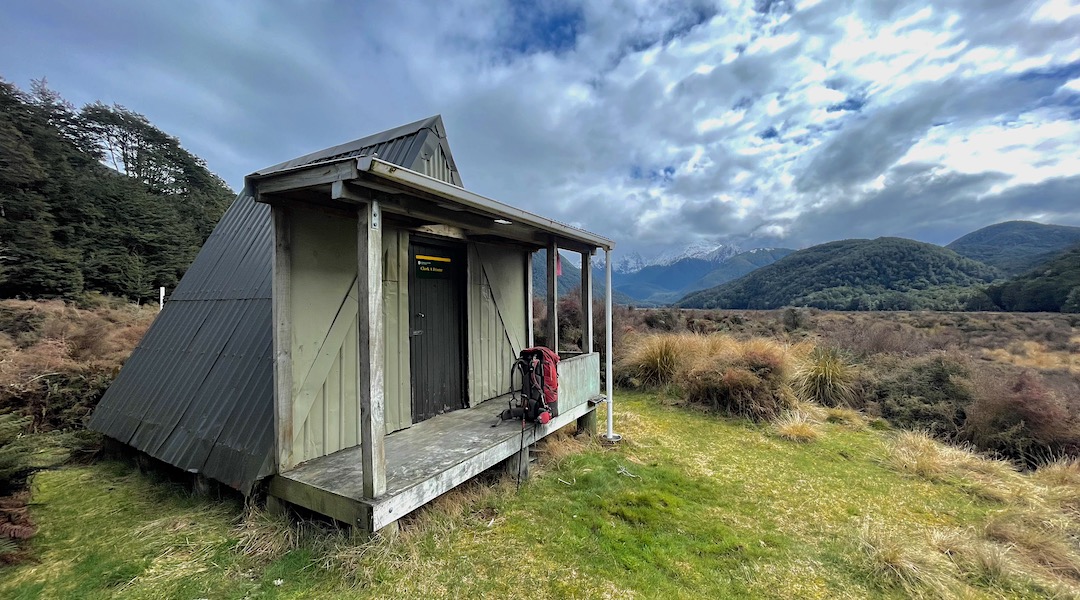