After 5 am the boys were up and getting ready to catch some big fish for their competition. No wasting valuable time when they could be on the water, and just before 6 am they motored off.

I was also up early with the crazy idea I might be able to walk to Borland Bivvy for my day’s outing. It’s not like I haven’t been training for this for the 50 days I’ve spent tramping in the last three months.

The enticing thing is that the track gets easier, comparatively, as the day goes on. That at least was my theory.

No dispute that my pack is somewhat lighter after the consumption of much of the food contents, even though it doesn’t really feel it.

Somehow I managed to leave about 8 am. These days are getting longer, and it’s light even under the forest canopy.

At Clark A Frame, by noon, then the full afternoon to get the four hours to the bivvy. Sounds like a plan.

It’s not properly dark until 7 pm. It’s just a question if I have sufficient zip after all this tramping. In summer, with more daylight and reasonable weather you wouldn’t hesitate.

Not a cloud in the sky, and the Southern Cross and Pointers shone brightly when I first got up. Frost was just starting to form on the grass and hut roof to prove that the darkest hour is right before the dawn.

I am well wrapped, with two woollen singlets, a thick woollen hoodie, and my alpine feather jacket on top. Beanie and both hoods up to keep my head warm. Woollen trousers.

And of course my jandals.

Fire was going last night due to some imported wood coming in by boat, and now my clothes and even boots are relatively dry.

With the guys up and away early, I was too.

No mucking around, and it was a speedy return to Clark A Frame. With the gloom relieved by some occasional blue sky and sunshine, it didn’t seem quite as grim as yesterday. It also seems much quicker to return over familiar ground.

All the dampness and moss and lichen and fallen trees were no trouble at all.

So, I was eating an early lunch at the hut.

The second half of the day was certainly slower, with more uphill and distance, and I began to run out of puff. I had all afternoon, even the three main areas of tussock didn’t slow me down all that much.

Still, it was after 5 pm when I made it to the forest of giant Manapouri power pylons, the road, and just there, the bivvy.

Strange that it was just like Clark A Frame, except in better condition.

The main issue was that water was in a creek, well down the hill on an exceptionally steep slope, so I walked the 300 or so metres to the bridge where it was closer at hand.

Will certainly sleep well. It turned out it’s been my biggest day of tramping since Day 1 on the South Coast Track.

It was further in distance today, and considerably more strenuous, but I guess I wasn’t carrying two weeks of food with no training. The hills were more of an issue.

Lying in my sleeping bag I’m glad it’s over, although tomorrow is road walking, and that is seldom much fun in boots.

Then again, each step is one step closer to civilisation.

No heating in the bivvy once again, but maybe those 220,000 V powerlines directly overhead will provide some radiation.

A guide to the night’s accommodation: Borland Bivvy 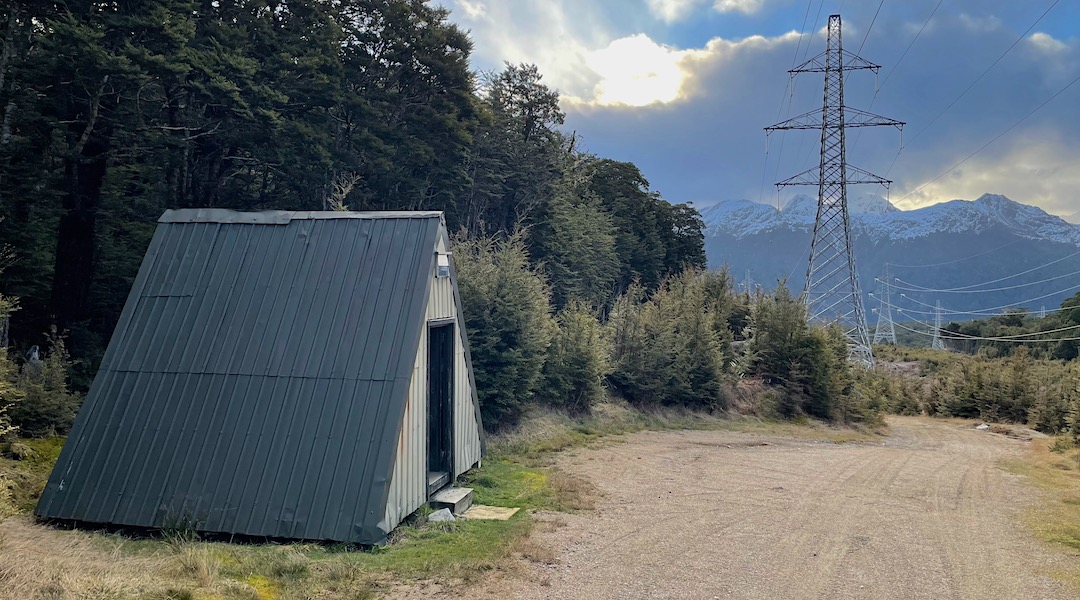