A route built by chamois, for chamois.

What are people doing up there?

Maybe I should mention that the top of the western peak of Emily Peaks that you need to clamber over is 2024 m.

Two short episodes made me question this activity.

Two well-known blokes mentioned they came down the top Burn Creek valley, rather than climbing down a ridge. Yesterday, I could see most of the way up, and it looked straightforward.

But then, to be honest, this was the cloudiest morning for a while. It looked gloomy around the Emily Tops. Actually I couldn’t see the tops at all due to dense dark grey cloud.

Nevertheless, around 9 am I set off up the valley. It did clear by the time I reached the saddle, but there were times when that didn’t look possible.

One thing in the valley. A 20 m or so waterfall that I needed to climb around. I really have to confess my head for heights ain’t good, but I just changed down to low gear, powered on up, and trusted my new boots would have sufficient traction on the greasy rock.

I would not like to come down that much though.

Much of the day was spent climbing up or down, to stay on the ridge. It was spectacularly smashed up on the Glenroy River side. I was once told by a geologist that the Glenroy ran along the Alpine Fault, and today I could look along it and see all the stress lines for myself.

I contemplated camping at either of the ridge top tarns, but it was too early, and wasn’t really the best summer weather today to whack my tent up.

But, as I said, lots of ups and downs, including a steep scree slope. Most of the ridge was okay, although the ground sometimes had clear earthquake issues, mostly channels across the ridge.

I had looked at my map and seen that getting down to the hut from the ridge would be an issue. I was standing on Point 1786 and couldn’t locate the hut. In any case, it was a long way down. It was clear there were cliffs, and it would be easier to continue along the ridge.

After a little bump I wondered if there was, in fact, a route down. Despite not being sure, there are bluffs everywhere, I started my descent. I couldn’t see all the way to the bottom, but there was enough hope to encourage me to continue. I surmised that I could always climb the 400 m back up to the high point if required.

Eventually, I could see it was possible. It seemed others had been down, and I guess more probably up.

My second nervous moment for the day was a short section of scrabbling on a steep slope, with some exposure over a significant bluff. Man, that did not look good.

Walk up that, and you can see where you are going. Where footholds are.

On the way down, with a pack? Well, it’s lucky there were stray flax bushes to grab.

Yes, I was nervous. Only two sections each about 15 m in length, but one was terror-inducing for those without a head for heights.

In such circumstances, it’s best not to think of consequences. But, as you may have noticed, I survived.

From there it was a short, and generally safe stroll to the bivvy.

I last visited Nardoo in August 1975 as a 16-year-old from the Mataki Lodge, the Nelson College outdoor training centre. We started with a waist-deep ford of the Matakitaki River. Did I mention there was snow on the ground even down at that altitude, on the main valley floor?

We had about 25 river crossings for the day, with Nardoo Creek water warming our cold feet every time we crossed.

I guess we also warmed up due to the steepness of the climb from the bottom of the valley, when we got to the climbing part.

On arrival to the hut, snow was piled some way up against the door, and we spent 20 minutes kicking it away.

This hut is where I learned that kerosene is a substandard tramping fuel. The smell and soot required the louvre window to be open at all times. On the first occasion, the door as well.

Five boys and packs seemed to fit into the two bunk structure, but it is slightly larger than many two-person bivvies. At least we could stand upright, although not all at once. It was cosy.

Almost 45 years between visits. I can’t think of any other hut I’ve avoided for so long.

I’m not sure I will be back.

A guide to the night’s accommodation: Nardoo Hut 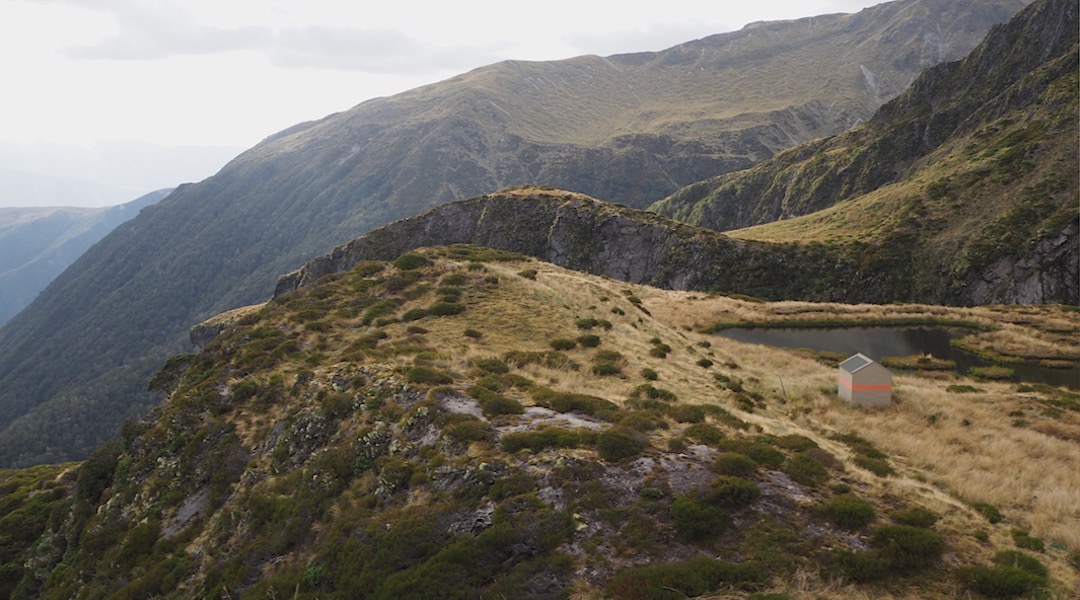