One day off scarcely enough after bashing my body around Nelson Lakes, and my right knee is feeling dodgy.

Maybe another 1000 m climb will sort it out.

I needed to sort my gear out. Not much equipment or food required for a two-night tramp. For instance, no tent was required.

My pack still seemed to have plenty aboard.

I met a guy in the car park who come for a look at his childhood area. The town that once had hundreds of people has disappeared with no trace, probably because a gold mining dredge rearranged the landscape back in 1991. He had moved away from Boatman, as the locals called it back in 1971, and now he was retired came to visit once a year.

Still the same, other than all the buildings gone.

There’s hundreds of localities on the coast that flourished briefly, or even for decades, and now are merging back into the landscape.

The trek up to Kirwans Hut is used by adventurous mountain bikers. It’s an old backtrack to an abandoned goldmine on a remarkably consistent gradient that isn’t so hard to walk up at normal pace.

The general greasiness of the often damp track would be a disincentive for me. I’d need very chunky tyres and excellent disc brakes.

Parts are sublime walking. The outstanding feature is a line up of some of the most massive red beech trees I’ve ever seen. Then there is a strange phenomenon around the 1200 m mark with silver beech trees fully taking over the larger vegetation. They are coated in a thick layer of moss, with limited undergrowth. I surmised it was due to the general cloud cover at that point. Below is quite diverse vegetation. Above this is a singular botany that has a surreal quality.

Two trampers had passed me with less than half an hour to go, and were watching the view. An experienced German tramper came over for a chat when I sat to appreciate the view once I gained the hut clearing.

For once this summer I had some companionship in a hut. Easy enough to deal with for one night.

A guide to the night’s accommodation: Kirwans Hut 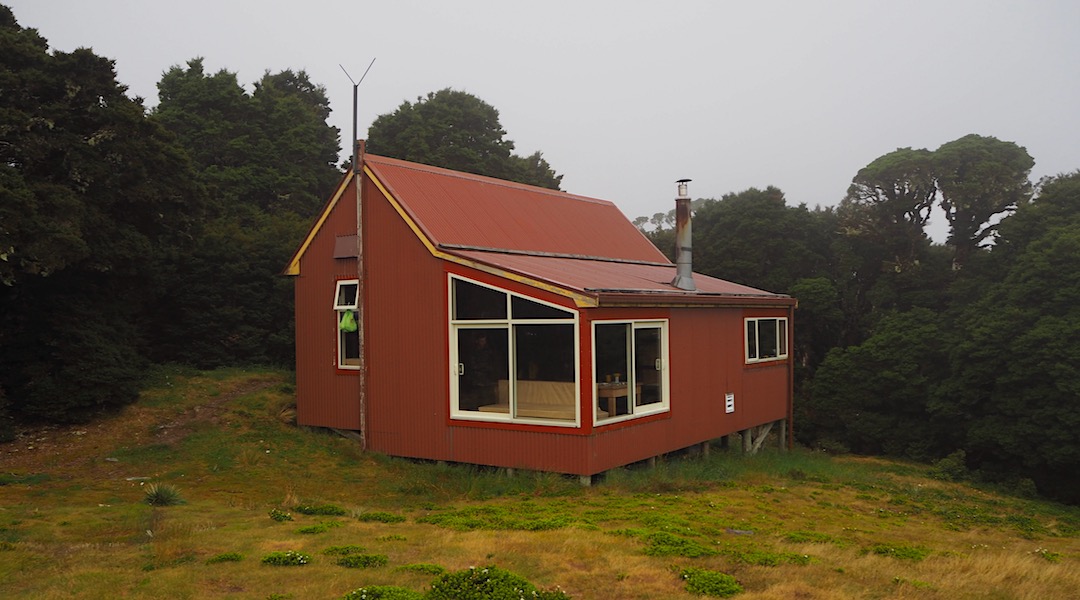