Low mist on the grass outside the hut, but otherwise blue sky.

Just what I need for tomorrow, on the tops.

That’s if I get to the hut.

As it turned out, it was a day of two halves. The first half, up until lunchtime, was cruisey. I crossed the Matakitaki River close to the hut and it was just a case of sticking close to the river.

Then, once I made it to Burn Creek, just in the river.

An old sign towards the bottom stated that the track had been stopped being maintained on 1 January 1991, but they may have done little maintenance for the immediately preceding years. Recent floods had deposited gravel in the river almost to where I turned off for the short, sharp Jacobs Ladder climb. That made it easy to stagger up the valley, albeit with plenty of foot rinsing. A lot of newly deposited beech trees in the stream to negotiate, most still with green leaves attached. Reasonable progress, and there was no need to get into the forest, although some markers were apparent.

I climbed up the side creek as far as a typical NZFS white Venetian blind cross nailed to a tree, and saw some cairns on the other side of the unnamed creek.

So far, so good. Time for lunch.

It was quite warm so I drank plenty and even filled my water bottle, something of a rare event for me.

It’s a steep climb for a while. If you don’t see markers once you get through the red beech saplings you are not yet on the track.

My memory banks from my youth were in good order. I did finally get up to the super steep climb that has a short length of Number 8 wire, but these days it’s loose, and I wouldn’t rely on it for any support.

At the top of this short length of verticality the track was reasonably obvious. Then it wasn’t. Quite a few windfalls that are quite brittle to get through, and I found myself where I probably shouldn’t be with bluffs ahead. I checked my GPS and seem to be 60 m too high if I compared my location to my old map that had the track marked. I dropped down 60 m, there was.

When I say “track”, this is being exceedingly generous. There are short lengths of Venetian blind on trees at 50 m intervals, although sometimes they are in clusters, and then you don’t get any for a while. With the regenerating undergrowth, fallen trees, undulating terrain, etc, it is not usually obvious how to proceed. Hint: stay at a low level above the bluffs.

I lost the track, then saw a marker when I was hooked up on the occasional lawyer. It ended up taking hours to progress to Rough and Tumble Creek. At that stage I never saw the start of the ongoing track, as many of the trees adjacent to the creek had dropped into the creek. In retrospect I guess I should have been higher.

In the end, I found I was making great progress in the creek itself, after all it’s only about 150 m over to the gold mining flats. I could see the end of the gorge, but there was no way to get up a 2m channel/waterfall. That left me climbing up on the true left side, not where the track was, but it looked easier than the sheer cliff.

Eventually, I got around the last 40 m of creek gorge with a lot of climbing and muttering. I sure felt that I was having an adventure.

It was still 3 km to the hut, and so with the weather perfect, and a great camping site offering itself, it seemed obvious to throw my tent up. I wanted to check out the diggings.

No hurry, no hurry at all.

A guide to the night’s accommodation: Burn Creek goldfield campsite 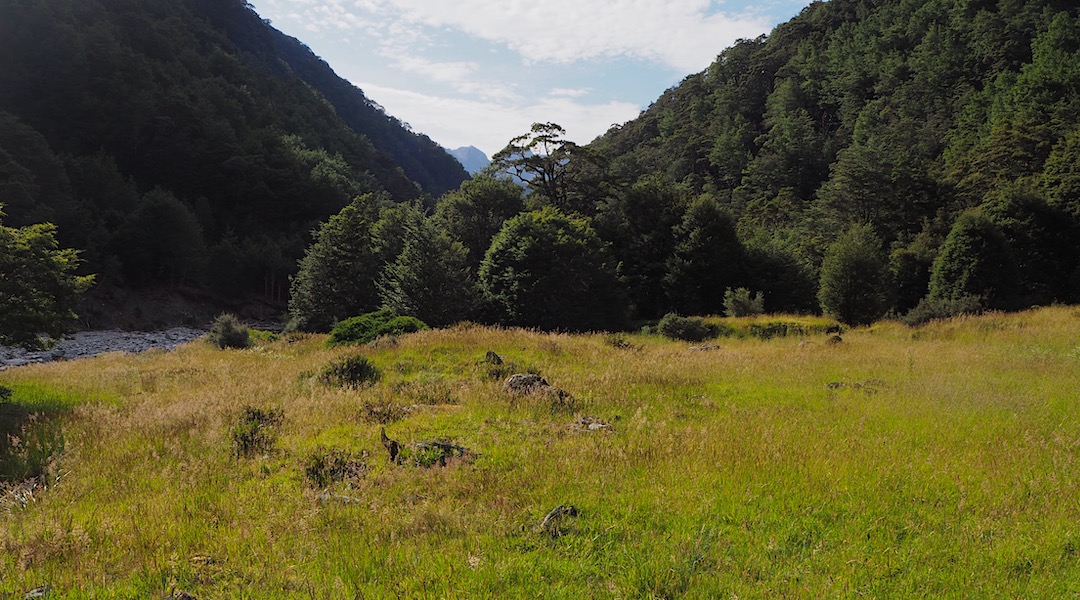