Oh, I was back in my tent, The Coffin, named for the close confines. Having spent more than 100 nights inside over the past six summers, it all felt very familiar.

Once I had relieved my leg cramp, I was entirely comfy, despite having abandoned my sleeping mat because for this trip I was intending to stay in huts all the way. The tent was for emergency use and doubling as a very useful pillow.

Obviously I picked a sheltered spot under beech trees that had a firm mattress of leaves, and an absence of roots. I certainly slept well as usually happens after a full day of exertion.

The morning? Cloudy, and some possibility of showers later. Similar weather has been forecast for tomorrow, but the following day is supposed to be clear. The first heavy rain is in five days time but I thought the ground will just soak up the first 20 mm. I don’t want those creeks getting up much, either Nardoo, or Burn Creek if I have to retreat.

The day? I had my moments.

The primary one was when I arrived at the grassy area high above Burn Creek and my map indicated to cross at that point. There was even a 9 kg gas bottle marker. But I couldn’t see the track on the other side, or any way to get down to the creek for that matter. It had started to rain briefly. Somehow it didn’t feel right spot, although it almost certainly was. Instead I got back into the forest, and sidled above the gorge, my thinking being that I could then drop at a more suitable place. Except that cliff was vertical, and was getting considerably higher. The other side was equally cliff-like.

Through the trees it looked possible above a 30 m waterfall, and it was. Possible.

I wouldn’t recommend it, except that the upper gorge was spectacular.

Once I climbed out the other side, sounds easy when you state it like that, there were deer tracks to follow. In the absolute middle of nowhere I saw two hunters footprints in the middle of some sphagnum moss, and it was a surprisingly short period of time spent scrabbling about before I popped out onto the actual track. Well, let’s be clear, I just saw a couple of consecutive markers.

I see someone made the trip from Downie to Burn Creek Hut in 6.5 hours. However, the general opinion is that the track could “do with some work”. Some of the first entries in the scarcely used hut book suggested it could be recut, and that comment dated from 1991. It hasn’t been touched since that time, and judging by that comment probably from the preceding 15 years.

So the markers came and went, as I thrashed around in the regenerating beech.

But as things both good and bad tend to do it eventually came to an end.

The tiny two-bunk dirt-floor hut was built in the early 1960s, and hasn’t had much subsequent work. Not complaining.

It’s been quite an amazing two days. My forearms are well scratched up, and frankly my limbs are tired.

Strange to be back in the hut I last visited when I was 16. Back then the track was more obvious, little trail finding was required.

In the old NZFS days people were employed to cut tracks out in the field, rather than answer questions in the office. My thoughts are we need both. Or, maybe we need to take on the work ourselves.

It seems most people visit directly from Nardoo Hut, or Bobs Hut.

A guide to the night’s accommodation: Burn Creek Hut 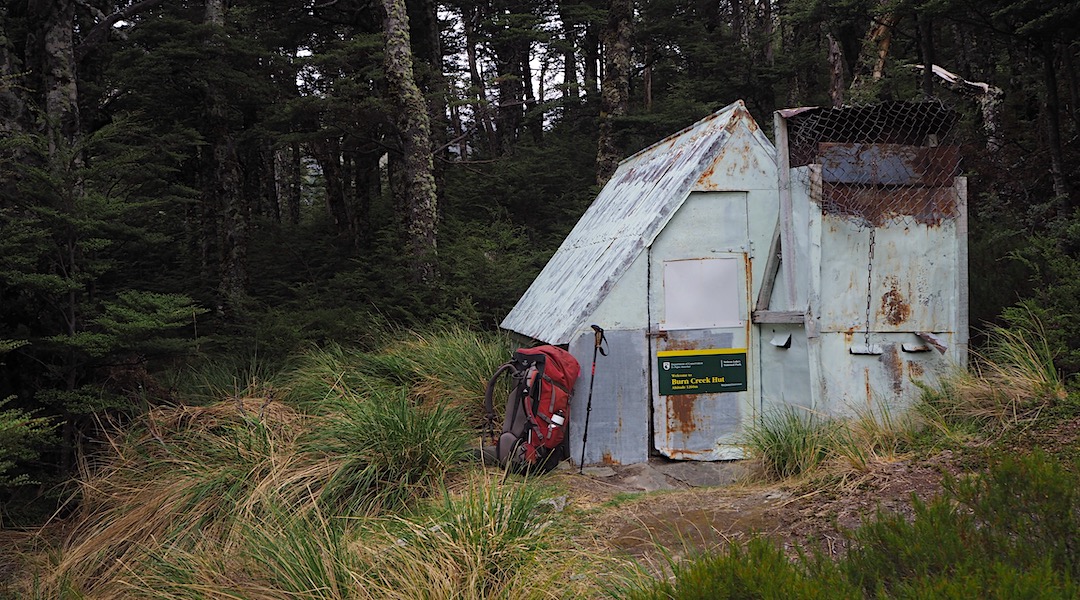