Instead, I elect to drink coffee sitting on the outside bench, and watch the birds.

Seems plenty of birds roost around the hut clearing before they fly off further up the hills, as the early morning birdsong is fairly intense.

1080 dropped over the 2019 winter doesn’t seem to have killed off all birds as the detractors suggest.

It really is a totally different experience for ornithologists to the west of Nelson, as compared with the ornithologically barren Richmond Ranges that lie to the east.

The wekas are nosing around, and in the trees are multiple bellbirds, brown creepers, grey warblers, and the odd tomtit that paid me a visit. Robins as well.

A survey last year found whio/blue duck pairs on average 500 m apart along the Waingaro River. This is so different from the Pelorus or Goulter Rivers in the Richmond Ranges, and the most plausible explanation is the reduction in predator numbers.

The fully benched track of yesterday disappeared, and it was a similar up-and-down root scramble found elsewhere in Kahurangi National Park.

Every hour or so I stopped to listen for the birds, but they mostly seem to have taken off for higher parts, except for a few wekas, bellbirds, robins, etc.

When I arrived at Soper Shelter, a tent camp not dissimilar from the one in the Cobb Valley, the kākāriki made themselves known. Seems they prefer to roost at river junctions, although in this case it’s the Stanley River South Branch, and Lake Stanley.

Apparently Lake Stanley was formed with a massive rock slide during the 1929 Murchison earthquake. I needed to cross the rockfall area, and it seemed insufficient, but once I was near the lake I could look back and see a massive scar in the landscape that stretched 800 m back up the hill. The entire hillside had slid down for hundreds of metres of fill.

That would do it.

I was planning on camping at the head of the lake, but before I could break out of the forest the Soper Shelter sign appeared, and I was happy to use that for my nights accommodation. I couldn’t go past the outdoor picnic table, and an accompanying kitchen bench.

A great place to stay.

A guide to the night’s accommodation: Soper Shelter. 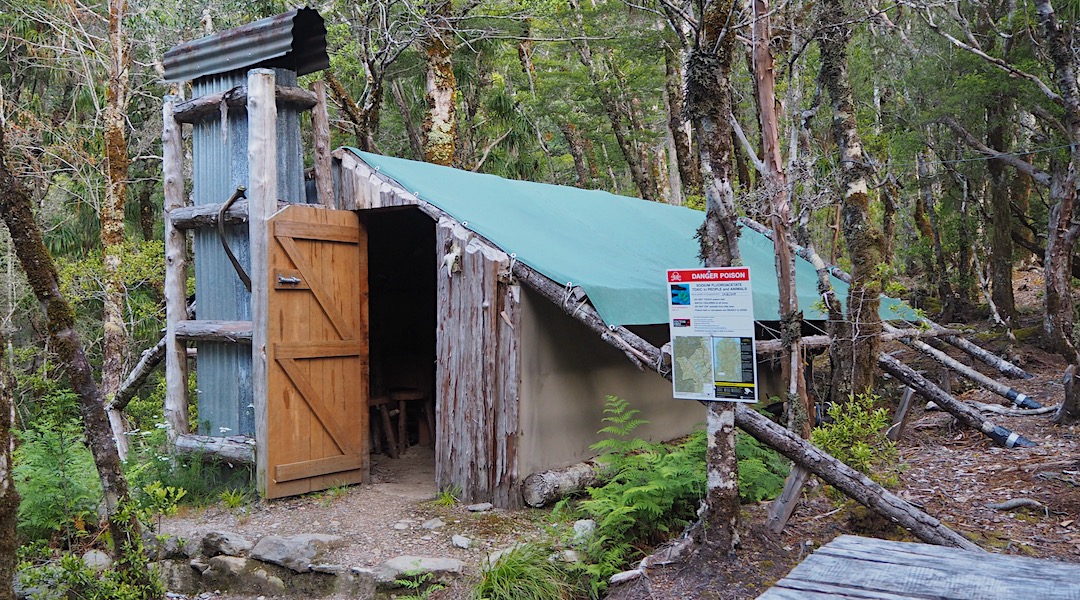