That’s the weather I’ve been looking for all summer.

Tin Hut Shelter does not boast bunks, but it has a sufficiently clean floor, having been replaced in the last 10 years, and in my case, my sleeping mat suffices for a decent sleeping surface.

No need to get my tent wet with early morning dew.

The water from the creek is funky, but it is possibly drinkable if boiled, unlike the tiny water tank fluid that looks totally toxic.

Not much at all.

The track is a mountain bike track as far as Riordans Hut, although some ride through to Waingaro Forks Hut. You really would need to have immense strength and skill to ride it all. I fear I’d be busy carrying my bike, or just pushing over some of those rocky sections.

For those on foot it’s pretty cruisy, as it was originally constructed as a track for the pack horses that supplied the gold diggings. It’s still in surprisingly good condition.

I have to say there are dramatic views into the Waingaro River gorge way below.

I peeled off to Riordans Hut for lunch. It’s great that the 1926 hut has been fully restored. It was almost completely pulled apart, and all the bits reassembled. Everything is hand sawn or hewn, and that makes immense character.

The three bunks with mattresses would be considerably more comfortable accommodation than the bunk-free Tin Hut Shelter.

The afternoon provided some of the most cruisy tramping on record. An even downhill gradient through red beech forest on a well-benched pack track that gets limited use. And a swingbridge over a thundering gorge hacked through the rock.

Just to add icing to the day, actually, it was pretty cloudless, and finally warm, the four bunk Waingaro Forks Hut was another beautifully renovated old miners hut. All from hand-hewn timber, local windfall, a total work of art for those connoisseurs of carpentry craftsmanship. Originally built in 1931, and renovated this century.

No one else around. For some reason this isn’t the most popular of tracks in the area.

A guide to the night’s accommodation: Waingaro Forks Hut. 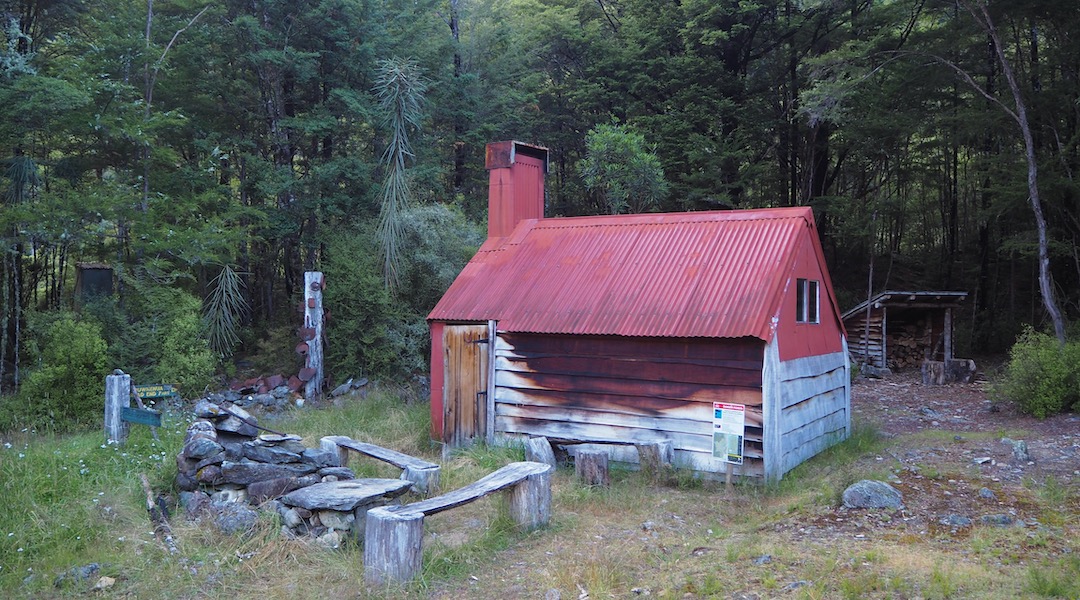