There were times in my morning preparations back in town when I thought that maybe it would be more sensible to stay home for another night. After a week of waking at 5 am, for some reason my eyes struggled awake at 7 am.

Then various tasks delayed me. Sorting my clothes and things for three weeks away from home, as well as what I’d be lugging for the first week. Cleaning out the fridge, and that meant a cooked breakfast to get rid of some eggs and mushrooms. Notify my contacts about my intended itinerary. Water the garden. Plant two new plants.

In the end, I was on the outskirts of Richmond after 12 midday. Then it was about 3 pm when I finally left the Kill Devil car park with my pack on my back.

It’s a switchback slog up the hill, with a decent 800 m climb to reach the top of the slightly undulating ridge. I was told there were 66 hairpin bends.

My legs were surprisingly strong after my end of year exertions, but nevertheless three twenty-somethings powered their way past me. Later the rustled back past on their way back down.

I just plodded on.

It’s a year-round mountain bike track, but few bikes appear to use it, probably because it would be hard work biking up. I’m happy to have my feet on the ground.

The weather forecast is great for the next ten days, with a couple of minor showers forecast well in the future.

In the end, my tent was aboard for some camping around Lake Stanley, or if the small huts are occupied. That meant my sleeping mat as well.

No point in overdoing it on Day 1.

When I reached the first hut, Tin Hut Shelter, it became obvious I should stick around. It was now late in the day, and while there were more daylight hours to the evening it’s a case of: What’s the rush?

After recent years of general gloom and rainfall events for my summer tramping Little Adventures it was time to take it easier.

An early night to be had, because this is basically just an empty shed.

A guide to the night’s accommodation: Tin Hut Shelter. 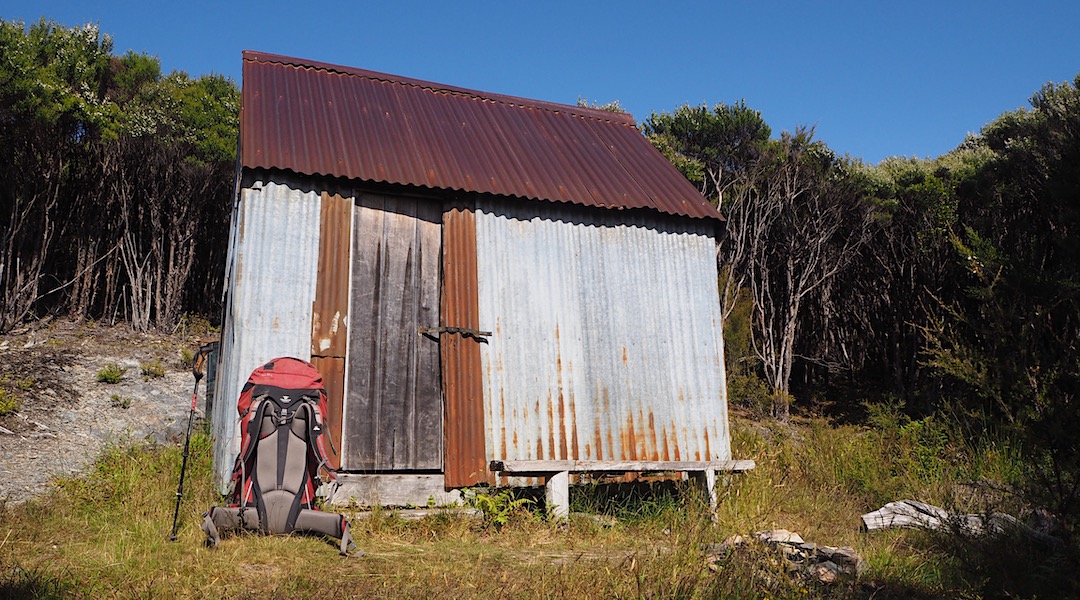