Like the Ugly and Beautiful Rivers in Kahurangi National Park, Misery Stream is misnamed. Maybe this is a secret I just let slip, but it’s a relatively easy, and often gorgeous walk up to the Top Hut.

Alongside the creek to start. Some getting feet wet where the bank has washed away, so the there goes my beautifully dry boots, but I knew some full crossings were required further up.

Plenty of Douglas fir seedlings, then into a grove of fully mature trees.

The conifers stopped after a short climb that landed on the edge of a kilometre-long flat. Plenty of views were now provided of some serious mountain peaks.

I spent some time pulling seedlings, but eventually the task seemed silly, better to save my energy for where only a few were colonising small clearings.

I tried out my Japanese saw that made short work of the mountain beech trees that blocked the track on occasions. Clearly I didn’t deal to the two big windfall areas, but my path on my return will be easier.

Another two stags were sighted on the other side of the stream, and they showed considerable athleticism bounding up a steep slope at pace.

Some surprise to find occupants at the hut. A couple, their son, and dog.

When he introduced himself as Nick, I knew immediately that we had met back in 2013 at Karamea Bend Hut. He was etched in my memory banks because of his humorous story of shooting a moose in Alaska. He was the guide’s assistant so didn’t do the shooting, but was left the task of carrying the meat from the many hundred-kilogram beast back to the Inuit people in numerous backbreaking 8 mile round trips. Even lugging the massive horned head was a superhuman effort.

We sat in the sun with his wife and son, and the dog that had by this stage ceased barking. They had choppered in for a Christmas break earlier in the day. A lonely kea called out for some mates at high level.

I camped down at the creek, with hardly a cloud to be seen.

Nick had a more recent weather forecast that was good news. Fine for the next few days. Now that was welcome.

He also had a report on the Wairau River. Still mega chunky.

Looks like I will have to re-evaluate my exit strategy from this Little Adventure.

A guide to the night’s accommodation: Top Misery Hut 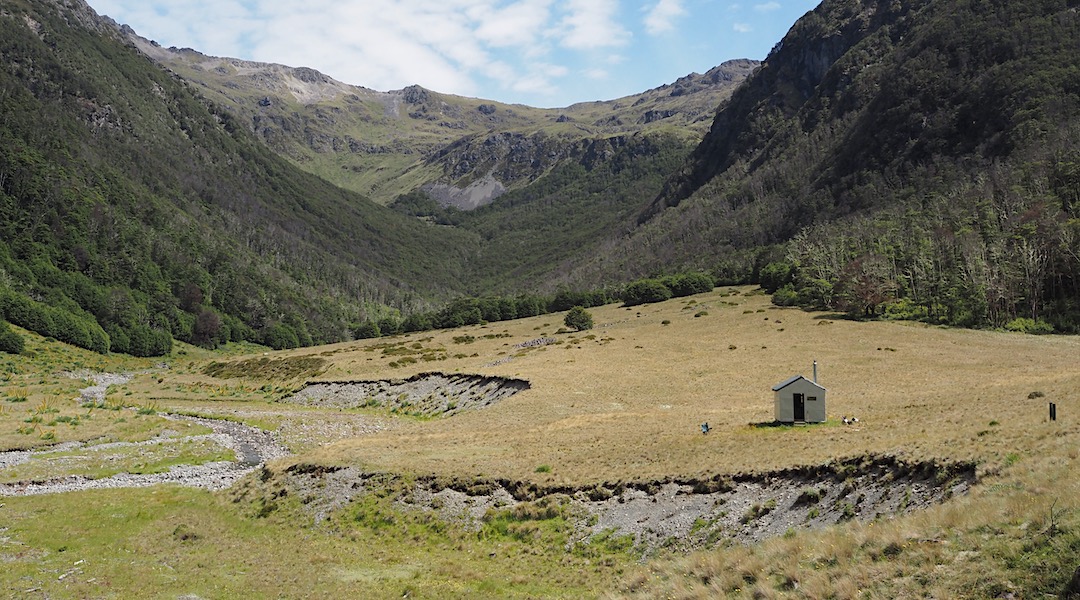