Leaving my boots outside to dry in the strong wind might have seemed an inspired idea, but in the morning they were filled with 10 mm of water.

Yeah, it must’ve rained during the night.

Not so smart, after all.

I was heading four hours down the valley, but I’m not one to keep a clock on such matters.

My philosophy on the matter of tramping speed was that it is unlikely I would attempt the route at any stage in the future, so why hurry on.

I sat on the doorstep watching the early morning light hit the mountains. I had a real mountainous appreciation, just because the hills have particularly jagged tops. Steep.

I was now on a wide valley floor. Some exquisite track to walk on through some mountain beech forest.

Some of my favourite kilometres of hiking in recent times to start the day.

Then I burst out onto a large open river flat area, with the steep-sided walls complete with two long, slender waterfalls. Now that was a picture, with the verdant grass giving it a Swiss appearance.

And there were two deer grazing in the morning sunlight. I wondered about crawling closer, with the wind in my favour, but I’d seen a few deer recently. Two on the initial afternoon from my first campsite, four yesterday, and these two had different antlers.

It continued as the loveliest valley I’d been in for a while, well, since Lake Monowai perhaps, but this was more dramatic.

I sat in the sun to appreciate it for a while longer. Another splendid day.

The second half was a tighter valley, climbing above the river for much of the time. Windfalls became more of an issue because of the slope.

A few more river crossings, that got my damp feet well rinsed.

A friendly couple was already occupying the Bottom Misery Hut, and had just come down from Top Misery.

No misery to report, just extensive afternoon conversation with other tramping enthusiasts who couldn’t believe their luck to find such a gorgeous few valleys to explore.

One surprise, I’m blown away by the numbers of conifers, both large and small, in the vicinity. That should not be any surprise with the large numbers of mature Scotch pine and Douglas fir on the hillsides.

A guide to the night’s accommodation: Bottom Misery Hut 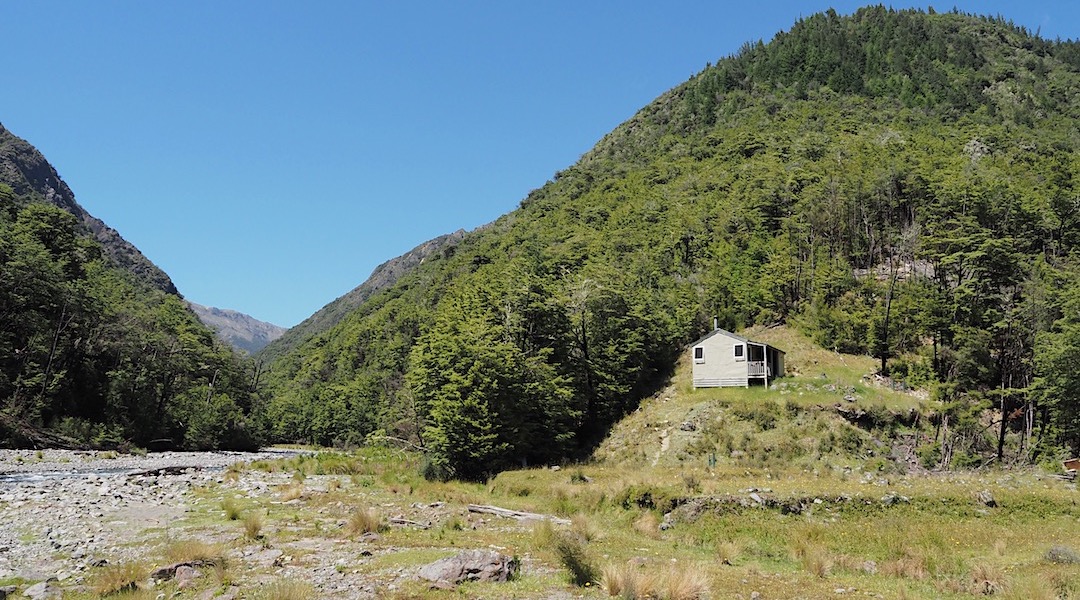