My bones were sore, my muscles weary despite a night’s sleep. It was hard work extracting my limbs from the bogs yesterday and I still have ten days’ supplies aboard.

Considering I had started at 8 am and arrived just after 6 pm it was a big day of effort yesterday. Okay, the cave detour probably accounted for an hour, but the bogs certainly slow proceedings.

I might have stayed at Hellfire Pass for another night, but instead opted to split the Mason day into two, by staying at Little Hellfire. Well, if required.

Hellfire to Mason is signed as 7 hours, but I had come nowhere near those times in the previous two days.

And my body, particularly my knee needs some respite.

All this was being contemplated as I watched a spectacular sunrise, and the early morning light on Benson Peak.

Heavy rain came through as I packed up, but it was much warmer than last night.

By the time I was ready, 9 am, the rain had ceased for the day and as I was striding up the hill there were even patches of blue sky.

Once past Point 399 the views are really turned on. Looking back to the Ruggedy Mountains of yesterday’s experience. Patterson Inlet/Whaka a Te Wera was visible. Mount Rakeahua in cloud. The Tin Range. Mason Bay. And Little Hellfire Bay way down there.

As usual, plenty of bog, particularly on the descent. No falls, but I took my time, sometimes listening for kiwi movement but it conditions may have been too bright for them to appear.

Seemed right to stop once I got near the hut. My knee was once again causing issues. I thought my body was not really capable of another 200 m climb and descent.

Anyway, I started to think about a new plan. No Doughboy, mainly because of a potentially painful descent. Maybe I should just go down to the end of Mason Bay for a night or two, then come back to Mason and Freshwater huts, and head over to Freds Camp Hut for a couple of nights before going out.

When I wrote that revised itinerary down it took me to 20 days. Also cut out two 400 m hills to get over.

In view of my knee, why not stay on the flat, well, once I get over that hill tomorrow?

A guide to the night’s accommodation: Little Hellfire Hunters Hut 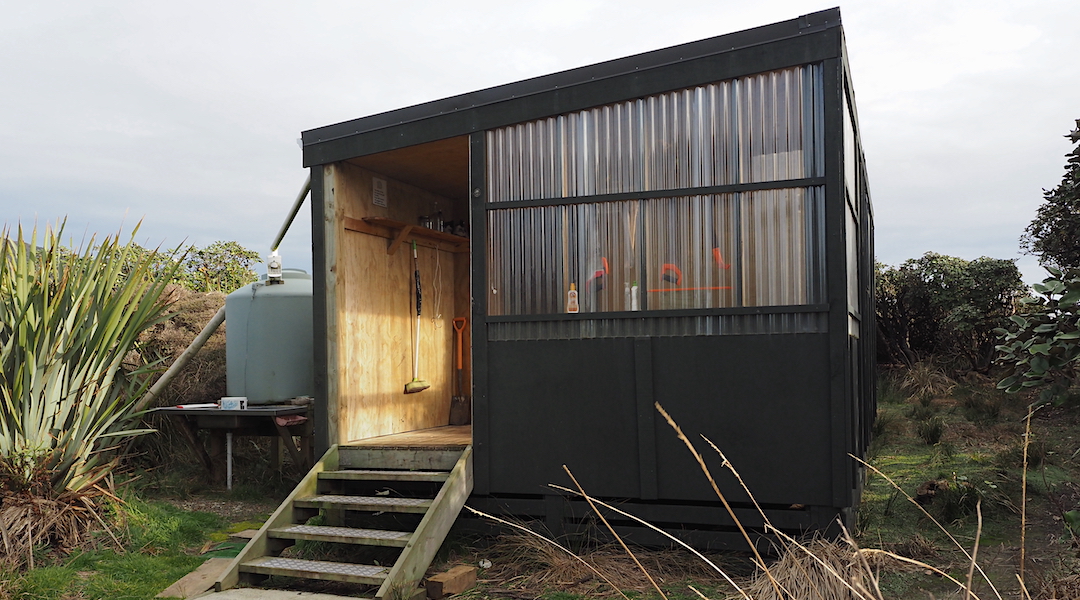