It was a big day. I took to the stream to the south of the hut to make my way down to the Kohutara River, not noticing a fully marked alternative.

My route started from the far end of the helicopter landing pad, just to the right of the dog kennel. Most of the way was reasonable, well, once I dropped into the creek, but a 5 m waterfall obstructed progress, and seemed to require climbing around. And a descent where some flax came in handy.

I took my pack off a few times and dropped it a couple of metres on other occasions.

There really had to be a better way, but it was plenty steep, and the 120 m descent has seldom felt so far.

Once on the river, I headed downstream to the junction and up the other branch. That also has an amazing gorge, complete with an impassable 4 m waterfall.

I backtracked a couple of hundred metres and headed up a scree slope to a ridge that took me up to the main ridge that I had seen the day before. That had looked like relatively easy travel from a distance. Pasture, well, actually Hieracium and silver tussock, and it proved easier walking than scrambling up a steep and crumbly ridge with my heavy pack. Goats frequent the area, and use that route to go up and down to the river. Plenty of goats in view, and I’d seen 15 at the end of the day. Two deer as well.

I made it as far as getting a decent view of what was hidden in cloud yesterday. Under the cloud, only pasture. What was now apparent was that everything above was totally gnarly.

The hut book had shown two entries that proved the route was doable, but I was wondering if there was sufficient daylight to get to a water source, even if didn’t make it to the hut. I looked around for some water and a flat spot to pitch my tent in the future, but neither was apparent.

Once upon a time, I would have scampered on, but today I changed my mind. Back from whence I’d come.

Faster downhill, but my knees were feeling it.

The view of Kahutara Bivvy and what I come down yesterday were in full view. Didn’t look too bad, but once I got down lower it did look pretty steep when looking up.

So, a change of plan. With my tent and 10 days of food, I really should have started out with a less strenuous path.

Off to Warden Hut tomorrow, then up to Palmer Hut.

Once I get back onto the farm road, in the downhill direction, I should make more pace when I don’t require to be continually looking for where to put my feet.

Despite getting back to the bivvy, it’s been an energetic day.

The finale was deciding to go up a small goat track further upstream from where I popped out to the river in the morning. After a short section seemingly randomly cutting through the forest, I got onto a ridge that more or less made it right to the helicopter landing pad. That track makes elevation quickly, with a fine workout for my arms dragging me up.

A guide to the night’s accommodation: Kohutara Bivvy 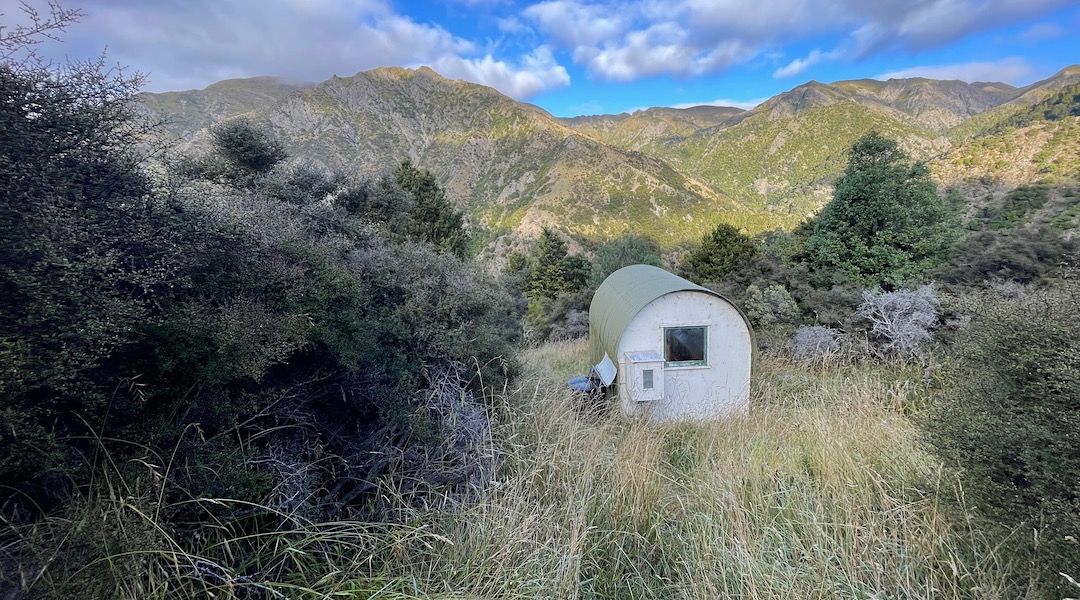