I’d been training for this since adolescence.

Listened to the 6 am news, a fine weather forecast for the following two days, and packed up and set off around 7 30 am.

Being me, I had waited until it was reasonably light in the forest. On my way in I come down the Leslie River, with everything past the big Leslie Clearing in the dark, and this time it was good to observe the lovely forest and river in this wonderful valley.

About 9 30 am when I finally left on the Wilkinson Track towards Baton Saddle, and was surprised to see the track had been recently cut. That meant avoiding most of the lawyer as I scooted up the substantial slope.

It’s a bit of a grunt to climb up above the limestone cliffs, particularly the last section from 700 to 800 m, at times over limestone slabs, with the occasional side of stinging nettle.

The major obstacle was a 20 m section of big slabs, which were greasy and sloping, but were decorated with stinging nettle shrubbery all around.

I was somewhat prepared for this eventuality and had my leather gloves, which also came in handy for the speargrass. I added my raincoat to my attire that already had long climbing pants and gaiters and I was set. I was dressed up like Father Christmas.

Unfortunately, I immediately sat on some stinging nettle leaves that penetrated my pants, and left what you might imagine a sensation not pleasant to encourage forward movement. Actually, I survived quite well, but those less perfectly encased will suffer more rapaciously.

But that was the end of the nettle that had adorned parts of the sides of the track to that point.

A short, steep clamber got me over the rim of the limestone, and suddenly life changed. Beautiful red beech forest, a well-cut cut and marked track, with a more gradual ascent. I could actually tramp in a normal way, bipedally, rather than hands and knees, while leaning heavily on my single walking pole, come stinging nettle slasher.

Slowly the tracks steepened, but the reason for the quality of the track maintenance appeared. Two handwritten “Snal Survey”, sic, plot signs indicated.

Once at the bushline, it became more of a wrestle through tussock, and Dracophyllum scrub proved useful to help drag me up the final 80 m to Baton Saddle.

Suddenly, big views, both back the way I’d come, over the splendour of central Kahurangi National Park, and the Leslie Valley, those limestone cliffs some distance below. And over the edge where I was heading, poles indicated the steep path into the Baton Basin, and perhaps the hut on show, now only 2 km away.

It didn’t take long for a young kea, unbanded, to drop by, and it sat on the top of the snow pole and began a serenade, just as cloud started to obscure my view. Then it flew off to joina mateon a more distant rock.

Time for my gloves again as the vegetation included a few fair sprinkling if not occasional profusion of speargrass, albeit a slightly finer and softer version than often found further south.

You lose 400 m in altitude on the way to the hut, on a poled track that needs to skirt the boggy basin floor.

Just as darkness began doing its thing, the track became firm underfoot and well-cut, so progress was greatly enhanced.

The Baton River, tiny at this stage, was crossed using Braille, and immediately above was the fine hut.

I sensed my nine hours from the track junction at the Lesley River is scarcely a record, even for the longest time taken, and the hut book mentioned six hours in one instance, but this is a route that is best described as demanding but rewarding.

At least I arrived mostly unscathed and relatively un-punctured.

Weary. I should mention that.

A guide to the night’s accommodation: Flanagans Hut 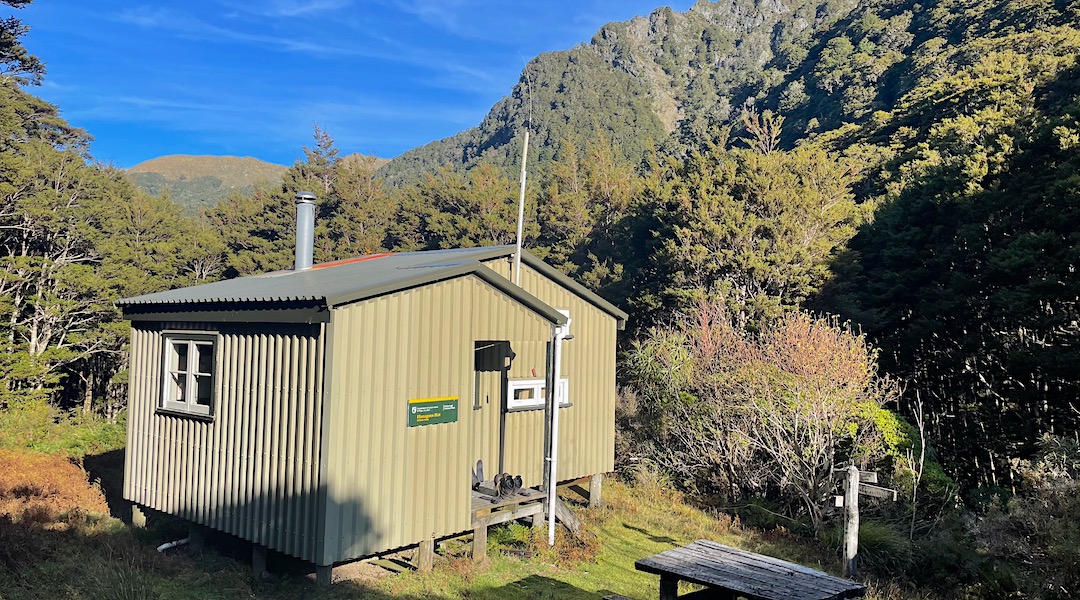