The final morning. The coldest yet.

A full starry sky was on show between the trees, and mountain crags in silhouette on the other side of the valley.

The hut shuddered as I lay awake and I could hear the trees swishing around. Time for the 5 am news, but unlike the day before when reception was clear and loud, today I could scarcely make out voices.

I needed an early start for a big day. My pack felt heavy despite the loss of nine days food. I still had a day or two rations, if I cared to procrastinate up in the hills longer, but frankly, I had no desire left. Not even much desire for the day, mostly because of the vast distance.

I got out some candles and lit them finally, something I seldom do. Why am I even carrying that ballast?

The realisation hit that there was plenty in my pack that could, and should be ejected from future tramping expeditions, probably even stray pebbles. Then again, my small Japanese folding handsaw is useful, when it’s needed, for instance. I sensed I might be using it during the day.

Tramping might just be out of my system for a while. I’ve had nearly 120 days in the last year, and gone to some interesting and challenging places. Roaring Lion and Baton Saddle make the cut there.

In retrospect, they didn’t seem so bad, but I managed them in optimal conditions.

The difficulty is really doing them on my own, and not really knowing what I was going to find. Bluffs. Deep rivers, etc.

Things are written in hutbooks that hint at the route, but they can be written by Heroes, I smashed that out, or by the It-was-so-rugged types, so it’s hard to get a real feel for it until you’ve accomplished it yourself. But if I can do it, many can.

Swimming the Karamea River when the water was still warm, and there was no breeze wasn’t so bad.

Getting through the patches of stinging nettle were more survivable when dressed like Father Christmas. Ditto tracts of speargrass on a steep slope.

This last tramp of the summer has been exactly what I wanted.

Out of my system, at least until the next time.

Yesterday it was hard to work out how long it would take to get to the road. The Flanagans Hut hutbook indicated problems finding the track in places, chains to hang onto, four river crossings, and other impediments to fast progress. As it turned out, none of those were of consequence. The river was low, although there were eight river crossings by my count, and the four chains, one was a long wire and very handy on some greasy rock slopes.

The main thing is it was supposedly 14 km long. So my six hours was about on the money.

Heading up the hill would take longer, obviously, and the intermittent track-finding sections, mostly through the red beech regrowth, might not be as obvious.

My task was to rejoin with my car that was stationed back at Flora Saddle car park, which I estimated was at least 24 km down the Baton River Road before another nine or so kilometres trek up to 960 m elevation.

I was finished draining my boots and wringing out my socks just after 2 pm before it struck me that this really was a dead-end road, and even on Friday afternoon few vehicles were likely to present themselves.

But within 20 minutes I was proved wrong. But it was a medium-sized car with two occupants. They drove straight past, smiling and waving.

I joined the very recently opened up section of the Great Taste Cycling Trail, and was wishing for a bicycle to speed up my motion. Every kilometre had a sign indicating how far I’d come, too little, and how much to go, way too much.

Three hours later, just before dark, I saw a car moving up the road towards me, slowing as if to stop for a chat.

Nope, another four-wheel-drive had snuck up behind me, and I had the uncomfortable situation of the two four-wheel-drives meeting at the point they encountered me. The driver going my way had a grim scowl on his face. I guess I was a random sight, wandering along the dead-end country road. That was the last of any prospective rides for the day.

Even when darkness descended, around 6 00 pm, I was still considering trudging it out. After all, it was almost full moon and there were no problems with plodding along the gravel road. I estimated I’d get to the car around midnight, then drive home to my own bed.

Instead, around 7 30 pm, around 12 hours since I’d left Flanagans Hut, I spotted a fishing access point to the Motueka River quite close by, and wandered down to whack up my tent I’d been carrying all this way for this very contingency.

Lulled asleep by the flowing water not so long later after a dinner of the last of my lunches, salami and cheese, some nuts, and a couple of sugary muesli bars. Couldn’t be bothered cooking up any of my delicious de-hy.

Yeah, I really crashed out.

A guide to the night’s accommodation: 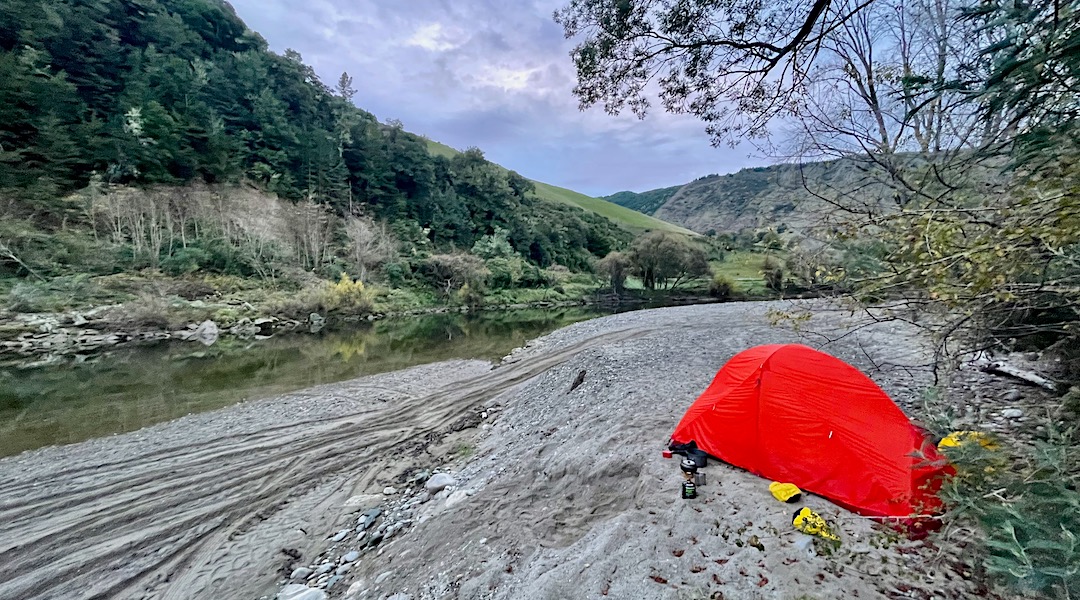