My original plan had been to go to Crow Hut and then Venus, but I’d been to both a few times, including the now-demolished early versions of the huts.

On the other hand, water levels were low, and it was a now or never moment to go down the Karamea River and see Roaring Lion. The weather was going to be good for the next two days, and I may never have the same opportunity, so instead of an easy 3.5 hours to Crow Hut, I’m off to wrestle with a fairly big river.

Helped that I left just after 8 am after removing some excess food and a heavy fuel canister that won’t be required as I’m intending just an overnight, but taking three days of food just in case.

It’s a bit unknown how long it would take, because the signage outside the hut stated 6 — 8 hours, and the indoor notice has 8 — 10 hours. Yes, I was going to find out, and yesterday I spent way longer than DOC indicated.

The Karamea River was knee-deep just at the Leslie River confluence, and had a smooth gravel bottom. Couldn’t ask for better, which meant it was going to get worse.

But the gravel continued, and the crossings, five times in the first half-hour, were similar. After an hour, I was into rock hopping on uneven boulders, and crossed for the seventh time, but as it turned out that wasn’t the best move. With a bit of a manoeuvre around a tiny bluff, it turned out I could probably have saved an hour if I’d stayed on the true right.

Instead, I looked at the smaller rocks as I made my way through boulders a few sizes up on my side. But the boulders were also in the river, and that meant plenty of deep holes, so crossing just wasn’t feasible. Instead, I clambered 20 m up a steep and grassy bank into the forest on a river terrace, where progress was much more straightforward.

Then the trees stopped, and I crashed through some scrub, and made my way eventually back to the river’s edge.

I tried crossing there, but nope.

In the end, it was the fourth spot tried where I managed to actually get across, and I went up to nipple height, holding my pack out of the water while negotiating the greasy boulders with lots of humps and hollows, and strangely being attacked by sandflies midstream. Where did they come from?

I figured I was about halfway down to the forest track over to the hut, and there was still time to turn back.

Not far downstream the walking became much easier, and I cracked out some territory. Might as well continue. I could always camp and share the river with the sandflies.

Almost 4 hours downstream, I crossed for the 11th time, and that was super easy. I wasn’t sure about the 12th crossing, but I avoided a climb around a bluff.

This time I also got reasonably wet, so I stopped for lunch. It was all blue sky overhead by this stage, and I sat in the sun for a while.

That felt better. It was getting much easier, and I was onto gravel once again.

Views of some huge limestone cliffs, along with some super easy walking. I’d now been going five hours.

Half an hour later was crossing Number 18. My last, but I had to get across to the other bank. It looks straightforward, the river was hardly moving and had a gravel bottom, but I sensed it might be deep. I could make out the stones on the bottom a fair way across, but then again, you never know.

This time I put everything electronic in a waterproof bag, with my pack having two pack liners that were firmly closed, with my coat between them. That should keep things dry if it was deeper than anticipated.

I kicked off from the last I could feel of the bottom, still 5 m to go, with my pack floating. I had my boots on, which proved little use with propulsion.

Man, I was not at all making progress.

Eventually, I slid my pack off, that had been forcing me under, and somehow I dog paddled, and breaststroked ashore. My pack certainly floated.

That’s one way to have a bath.

I needed a break once I made it to sunshine, but my pack was way heavier than before and dripping furiously.

Best just to keep walking to not get excessively cold.

At least I was now on the right side of the river and starting on the last clearing, with the track I was looking for beginning at the other end.

The track proved a delight, recently recut, with plenty of markers. And pretty level once I’d climbed onto a river terrace.

An easy half hour later I was drying out my gear in the afternoon sun on the deck of the hut.

Almost 7 hours since I left, which didn’t seem bad considering the mucking around on the wrong side of the river, and stopping for my lunch.

Nice to get to a hut while it was still light.

And it’s a great little hut.

Maybe I should have stayed a second night and made the most of it, but with inclement weather on its way, heavy rain registering in Fiordland at the time, I really didn’t wish to be caught out with those river crossings again.

A guide to the night’s accommodation: Roaring Lion Hut 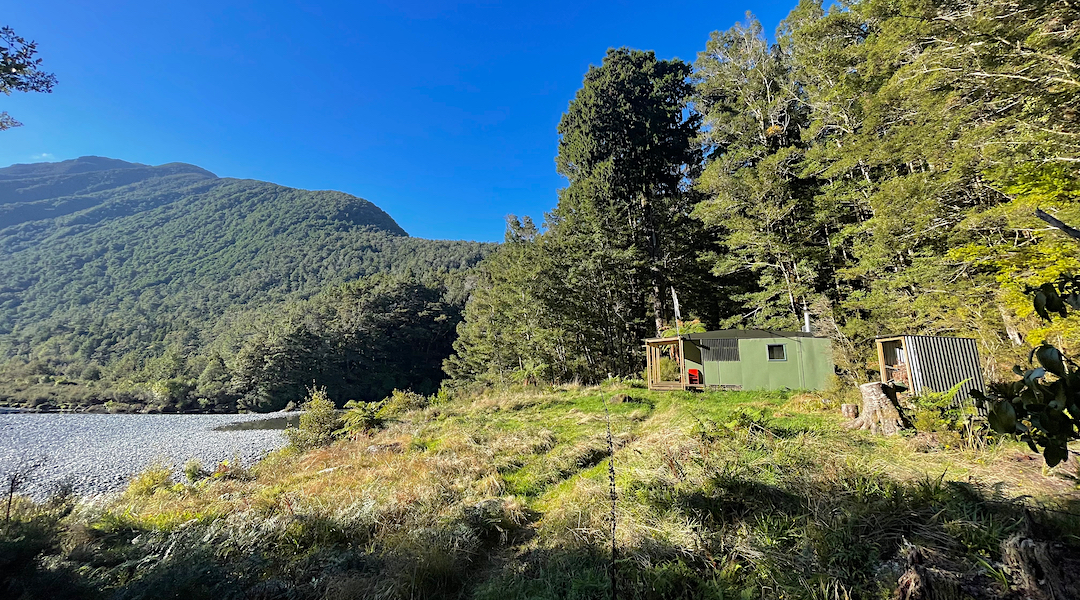