Sometimes it’s awkward to disentangle yourself from self-employment. Then again, you make a decision and live with it.

I’m having a week off right in the heart of my busy period for the year, leading up until Christmas.

A schoolmate who I had only had a cup a coffee with since we shared a house in Uni days was in New Zealand, and that didn’t happen often now he had lived in London for at least the last three decades.

A mid-week get together with others was planned and I was headed to Christchurch to join them. I thought it was an excellent opportunity to spend a few nights in the Lewis Pass area as I made my way south.

That was if I could get through all the roadworks on the Nelson to Christchurch road. There must have been 15 or so Stop/Go sections of one lane traffic.

The new French bakery in Murchison was closed despite heavy traffic in town. I couldn’t wait around until Wednesday.

No worries. I’d get something in Springs Junction.

The burger caravan was set up there. I’d get one of those.

A bun-less burger? Why not?

This was my last brush with civilisation for a few days, and I was on a low-carb diet.

Interesting, if not sad sight when “the burger” came out.

Too late to head off to Pell Stream Hut, so I tootled around to Lake Daniell and the 1976 hut. This was built as a memorial to three keen trampers who were killed when the previous hut, on a nearby site, was wiped out by a rock slide during a night in Easter 1974. I remember all this from my school days, and visited at some stage shortly after the hut was built.

Because it was only 2 to 3 hours from the highway, and it’s a flat track through splendid beech forest, it’s pretty popular with families, although being a Monday evening, the weekend crowds had gone home, leaving me with only the noisy birds for company.

Clearly a lot of shooting from helicopters had eliminated most of the deer from this side of the Maruia River. DOC has 45 km of track lines with traps every 100 m, with some self re-setting so they need little maintenance.

The birdlife on the way to the hut was noticeable: the predator control seemed to be working. Robins, brown creepers, bellbirds, and small indeterminate species in the distance. I didn’t hear any kākāriki, ie, parakeets, but they were around. I’d keep my ears peeled.

I spotted some eels from the jetty into the lake. It was windy so not picture perfect, but good views were had across the lake. A trout jumped for insects.

An early start and climbing Point 1201, that’s about 700 m in altitude gain, most in one big hit, then along a relatively rounded ridge for a few kilometres before dropping directly on the Pell Stream Hut. Next day walking down Pell Stream. There is a track as well but apparently with the river low, and it is, the direct stream route is the better option. Then head to Nina Hut.

Kinda weather dependent, and how my body holds up.

After all, I climbed Mt Arthur yesterday, and that takes a fair degree of effort, even if you drive halfway to the top.

Yes, feeling like a reasonable day’s effort with another 15,000+ steps, even if most of them were on the level.

A guide to the night’s accommodation: Manson-Nicholls Memorial Hut. 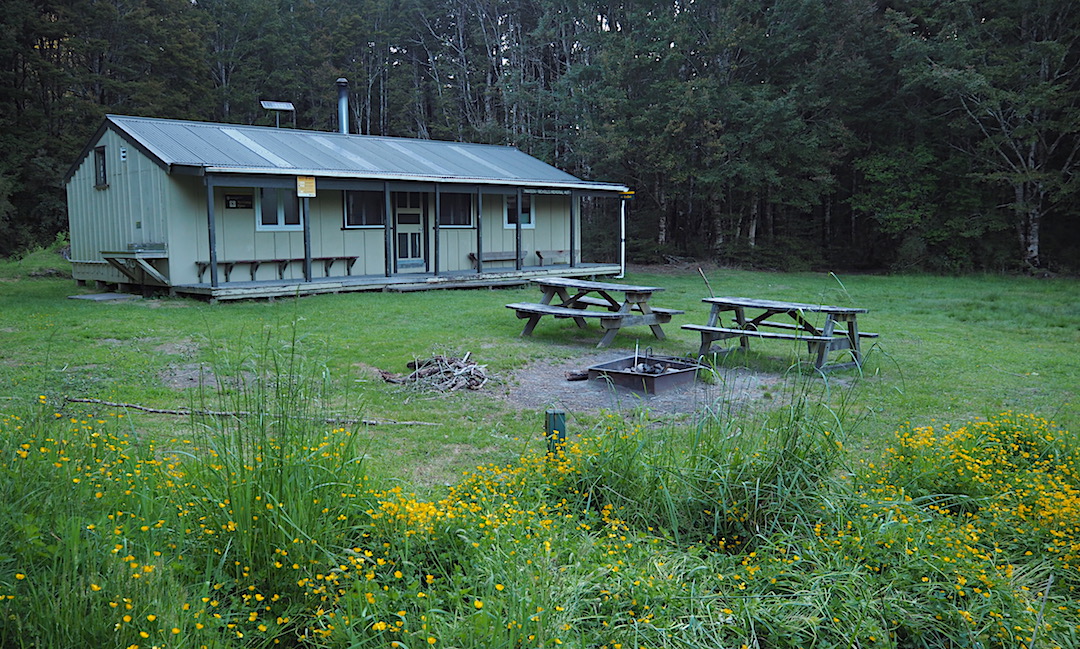