With all that snow in the hills around it was no surprise that it was cold in the morning.

Not a cloud in the sky early on, like pre-dawn 6 am. A sliver of moon on show.

Frost was slowly forming on the ground.

Back to bed for another hour.

I noted my socks had dried out overnight, but seemed unduly crusty.

No. Just froze while hanging up.

It was a slow start, partly because while getting near the end of a gas canister, my coffee and porridge took a long while to prepare. Or, maybe it was just too cold for the liquid to turn to gas.

Almost 10 am when I left, and after a lot of contemplation, I was off to Alfred Hut. My main argument was it was now or never. If I didn’t go now, my second expedition here, I doubted I’d start out on a third.

The first section to the Gore/Alfred Stream junction was on near flat gravel, and that continued at least another kilometre.

That was 40% really cracked out without much concern.

Then the valley narrowed substantially and I wandered up the side of the stream, crossing as required. About two hours up there was a short rock scramble to avoid a chest-deep dip.

I stopped for lunch soon after, and by then I was in the snow. No point in sticking around in one spot for long with my wet feet and legs cooling me down.

Plenty more crossings, in fact, I must’ve crossed over 50 times in total. Towards the hut, I just trudged straight up the shallow stream on ankle-deep gravel rather than floundering in the snow on the banks.

After almost four hours of walking, I made it to the hut which I found thanks to a large DOC orange triangle on the top of the crest.

The hut was in the last of the sunlight, but the open fire and two sets of louvre windows suggested it would be another cold night. Snow on the roof although one side had half slid off.

300 mm of snow on the ground around the hut.

No wonder I slid into my sleeping bag before it was even dark, huddling around my hot dinner.

A guide to the night’s accommodation: Alfred Hut 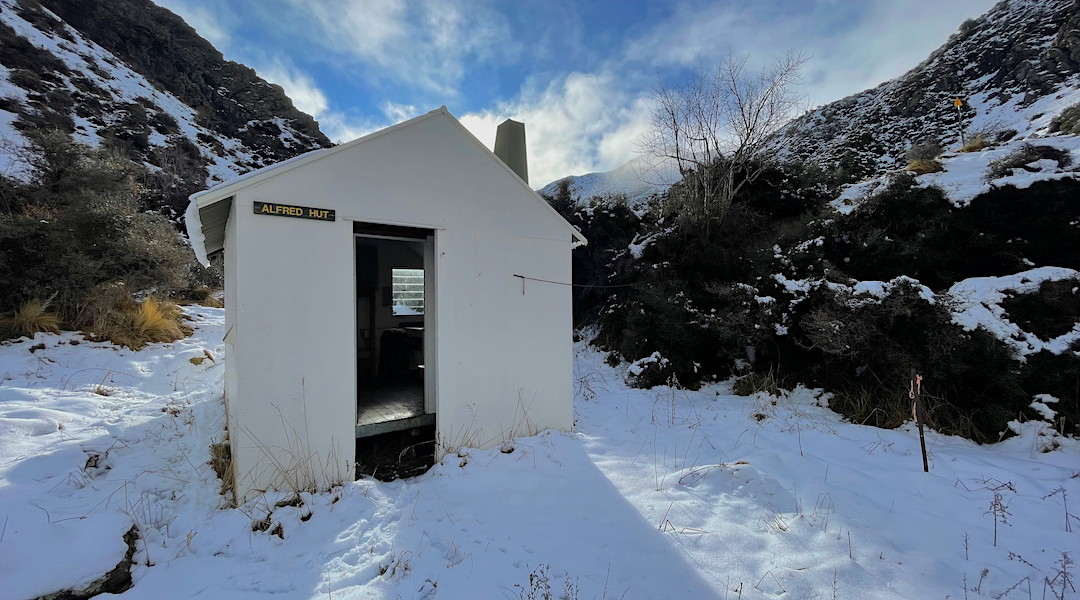