Awapoto is one of those slightly sad, somewhat neglected huts.

I guess being of the Lockwood variety would date it to the early 1980s, but it’s not so much the hut itself, it’s cosy enough, it’s the surroundings.

A big blow or two has come through in recent years and there’s no shortage of firewood, quite a few mature trees became horizontal and some have been chopped up, the logs still with a golden tan colour to the wood. The bracken has invaded so you have to push through the fernery to get to the wood shed or toilet, indeed the hut when you arrive. There are a few fabulous mountain cabbage trees around but they are also looking somewhat sad, maybe that’s just what gives it the aura of neglect.

The grass is long, I saw some rustling down there, wondering if it was a stoat or cat, but eventually a weka’s head emerged, glanced unconcerned at me and went back to its fossicking. I enjoy those birds, both curious and flighty at the same time, there was one at Castle Rocks Hut last night making a racket under the floor.

The walk today had just the one major uphill, Castle Rocks is at 730 m and you climb up another 300 m before dropping down to the 677 m here.

I mucked around over at the rocks for an hour or two, the rock formations while interesting enough are overwhelmed by the view down the Marahau Valley, over to Nelson with Fishtail and Mount Richmond visible over the clouds, in fact snow to be seen on the inland Kaikouras beyond. That’s Mot through the clouds to the right and the Waimea Plain beyond, it’s certainly quite the view, slightly veiled this morning.

The view from Porter Rock just before Moa Park shelter offered a slightly different perspective, not much civilisation in direct view, looking over the Torrent Bay estuary and large expenses of regenerating bush.

My proposed evening destination was altered when I meet Diane and Neil bathing their feet in the creek near the Moa Park shelter. They weren’t entirely sure but thought the old four bunk Wainui hut may not be extant. Err, later found not to be true.

That meant the direct direction to Awapoto was the sensible route due to the amount of remaining daylight, that sign stated four hours.

We chatted a while, then, 2 30 pm it was the time to make haste for my mattress. The track along the Evans Ridge is for the most part easy the walking, there’s much less traffic up here, it’s mostly quite level, and the slopes, at least in this direction, descend from 1000 m to around 650 m. There’s plenty of broad-leaved dracaphyllum in the higher parts, ratas up there as well, but eventually it’s mostly beech forest.

By not staying at Wainui I’ve now cut a night out this tramp, it’s now just going to be three days.

So, just one of those joyous early autumn days, cloudless, not quite cool, no wind, attractive bush, easy enough walking, exactly what you hope for when planning a trip.

A guide to the night’s accommodation: Awapoto Hut. 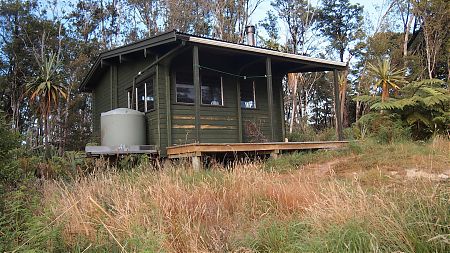 ← Day 1 | Castle Rocks hut, and even some phone reception Day 3 | Takaka, for a big Saturday night out in civilisation →