There’s more to Kahurangi National Park than the Heaphy Track.

Here’s some of the other huts that are scattered through the park.

Adelaide Tarn Hut is tiny shed that is just about as compact as a four-bunker can get. 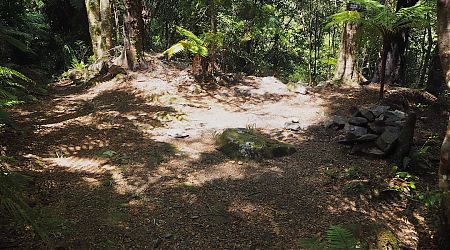 At least it is level, and free of tussock. 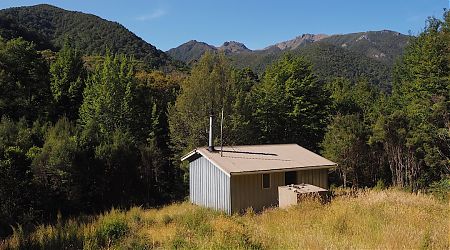 A spacious six bunker, with a famous feature seldom found working in other DOC huts: a hot water tank, and a shower, complete with floral shower curtain.

Although the views from the Balloon Hut site are limited the walk over to Lake Peel are extensive, both into the heart of Kahurangi National Park, and east to the Back of Mt Arthur, the Richmond Range, and down into the Cobb Valley.

Might point out there is no town nearby and those wanting bells, other than bellbirds, will also be disappointed.

Boulder Lake Historic Hut is a good example of an older style hut from back in the day, although few would choose the older version to the comfort, space and amenity offered by the new.

Boulder Lake Hut has a great setting in the tussock on the forest fringe, not so far from the lake.

This place oozes character and is one of the most likeable huts around, even if it only has two small windows.

Yeah, it has buckets of character that ain’t so common in your standard, more modern, DOC hut.

Cobb Hut is for those who don’t want to join the crowds in the close by, and more generously proportioned, Fenella Hut.

The Cobb River campsite is adjacent to the Cobb River, where there is a decent summer waterhole for the adventurous to have a summer dip.

Cobb Tent Camp was among the last constructed in New Zealand, back in the late 70s and transferred to this site in 1985.

Where else is there a fly fishing rod hanger on the verandah? Seems it gets used a bit during the season.

For those who like the idea of sleeping, more or less, out in the open but with sufficient shelter against most elements.

It is the usual hut of choice in the Cobb due to the location at the head of the valley.

One of the earliest remaining huts in the Nelson region Flora is actually two mirror image huts separated by a woodshed.

Ghost Lake is the best, ie, least kooky, of the huts on the Old Ghost Road, add the location, right on top of a cliff, with a huge view to the east, the almost half way point, and, well, it’s no wonder it’s the most heavily booked accommodation on the trail.

Not insulated, not adequately insect screened, the wind can whistle through between the timber cladding. All rough sawn timber that doesn’t allow proper cleaning.

This is for those who enjoy a brush with history, and like to keep their accommodation costs down at the best level: it’s free to stay.

Helicopter Flat Hut is an original NZFS hut that appears to have been extended and renovated at some stage, probably around 1980 when Taipo Hut was built.

Not many people visit Hurricane Hut these days, and half of those that do are hunters who are choppered in.

Another NZFS SF70 six bunker in good order. It’s fairly authentic, even has the horizontal bracing at the top plate level. Few visit, maybe because of the grunt getting up there.

This is one of the most spacious DOC huts around, significantly more than the standard square metre per resident you find in your average DOC hut.

Exactly why this hut was built so large is a curiosity, can’t think it is at capacity often. Guess someone at DOC must have recognised that the Leslie River walk is as pretty as it gets around here and thought if you built a great hut people would just turn up.

Back in the 70s they clearly expected great things of the Wangapeka Track. 20 bunks here, and at Taipo.

Kiwi Saddle Hut is another in the NZFS SF70 style hut, a six bunker, still with the original open fire, and louvre windows, but the squeaky Vono, ie, metal framed, bunks have had the mesh mattress supports replaced with plywood.

The noise from the paradise ducks early in the morning should avoid the necessity for an alarm clock should you choose to stay.

Larrikin Creek Hut is an obvious place for accommodation for those who wish to climb The Haystack or The Needle, or just explore the Hundred Acre Plateau.

One of the smallest structures around that is intended for sleeping. She’s mighty tiny, but okay accommodation for solo travellers or two good friends.

Lonely Lake Hut is similar in size to Adelaide Tarn Hut, ie, a rather compact shed, but the lack of a fourth bunk means there is actually somewhere to sit.

You sleep outside on a small open timber platform that is accessed by climbing a substantial timber ladder, so it’s not really for those prone to sleepwalking.

What’s worse? Sharing this campsite with the swarms of sandflies, or the many camper vans, or car campers who find it a cheap and convenient campsite just off the Buller Gorge highway, at the southern start of the Old Ghost Road.

The Mokihinui-Lyell Backcountry Trust has ignored, or been unaware of, DOCs huge experience in the provision of backcountry huts, and basic, obvious, long proven elements of hut design have not been incorporated here.

There are a few mostly non-lumpy, almost level and somewhat sheltered camping sites to whack up your tent and enjoy the sunset and sunrise at altitude.

McConchies Hut is an old NZFS four bunker in the Matiri Valley which doesn’t see much traffic these days.

This is the most original and well preserved NZFS SF70 type huts built in the northern half of the South Island.

Mokihinui Forks Hut is located on a river terrace overlooking a grassy expanse near the junction of the two Mokihinui River branches, and made famous by the recent removal of an enormous “500-year-old” kahikatea tree. There’s lots of firewood in the woodshed.

A good introduction to a standard DOC hut, complete with a wood burner to give cosy nighttime conditions. Just don’t overdo it, those top bunks can be excessively sweaty.

Myttons Hut is a great hut that the kids might enjoy for their first night out tramping. 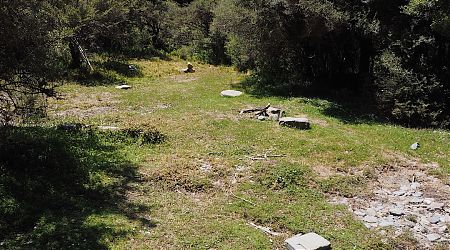 Flat, relatively sheltered, and close to water. Also, as a bonus, no tree roots, and it’s possible to get tent pegs into the soil.

Great camping here, kaka and kakariki may also enjoy the spot if you are lucky.

Remember to have a window open when cooking to avoid carbon monoxide asphyxiation. That might just spoil your evening. 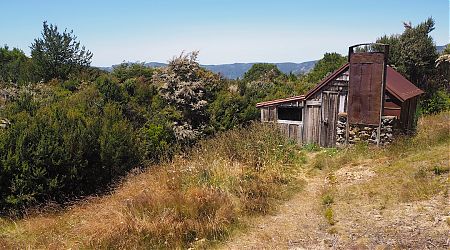 A real trip back in time.

Used by fly fisherman and those brave enough to confront the numerous sandflies. 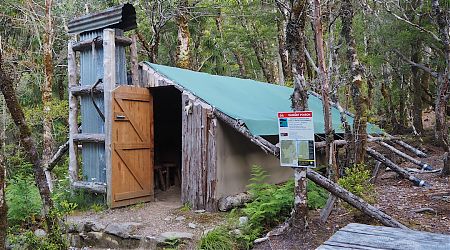 A fun place to stay.

Specimen Point Hut has a magnificent location in the Mohikinui River Gorge, and you can even see the view out the windows from the living area.

How many of DOC’s huts still have a dirt floor? And this one has a roll-up plastic wall, ie, ventilation tends to the excessive unlike the other shelters on the Karamea-Leslie which tend to the opposite extreme.

She’s tiny so plenty cosy, you would want to be close friends if there were more than one resident.

why would you locate a hut in an obvious spot to be swept away in a large flood?

This might be one of the best places in New Zealand to observe a whio/blue duck, that’s the endangered bird depicted on the New Zealand $10 note.

Sylvester Hut is one of the best bang for your bucks around: close to the road, great hut, excellent views.

Split level hut somewhat away from Taipo River but with a great view out to the surrounding bush.

Thor has been refurbished in 2008, ie, new roof, painted, etc and it’s in such good nick DOC might just keep it like this for the foreseeable future. 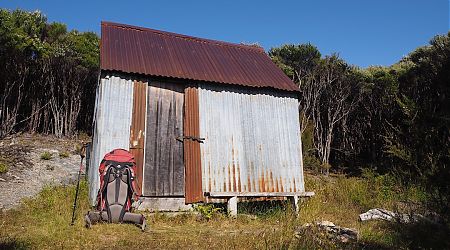 Tin Hut Shelter is a hut because it has a roof and four walls, a new floor and door, and looks like a hut. It’s a shelter, though, because it has no bunks or mattresses.

Situated on a terrace above the Karamea River and surrounded by country still showing scars from the 1929 Murchison earthquake.

Trilobite Hut was built as accommodation for the Cobb hydroelectric scheme but has subsequently been converted to a comfortable enough DOC hut.

A unique place of accommodation, how many others have one wall of solid rock on a 60º angle, seemingly hand hewn by some novice sculptor who hasn’t quite got the art of fine finishing of the material totally sorted, chisel marks are still in evidence?

Has to be one of the great located huts around, perched in a small clearing just above the Karamea River, you can pop out to have a look at the huge trout languidly oscillating in the clear green water below. 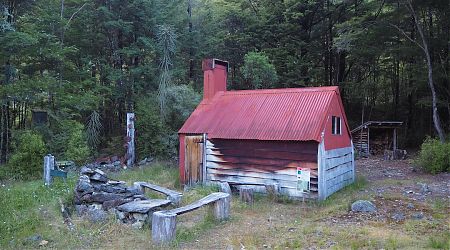 Guaranteed to become one of your favourite small huts.

For those who want an early morning start on the Matiri Ridge route over to Hurricane Hut there is a small, almost level campsite in a small clearing in the forest.