For much of the year the huts of the Northwest Circuit, and even less travelled Southern Circuit, are well under-utilised, weeks can go by in winter without use. In summer there’s more likelihood of fellow inhabitants, particularly Port William and North Arm, the huts for the more popular, and shorter, Rakiura Track.

Many of the huts may also be shared with hunting groups, after the elusive white-tailed deer, who can book a hunting block for up to 10 days and generally arrive by means of transportation that might not be primarily involve the use of feet, ie, helicopter or water taxi, and therefore arrive with the whole ensemble for total hut comfort which can get spread around and in any case the actual hunting may not be the primary objective.

There are specific hunting huts, Cavalier Hunters hut is representative, which means at least the Christmas Village and Mason Bay huts are guaranteed hunter free. There are also dedicated hunter’s campsites which at least have a long drop toilet and a stream nearby, but they are for the exclusive use of said hunters. January (holidays) to June (end of the deer roaring season) is the main hunting period.

Camping is technically possible in areas outside the huts but in view of the additional weight factor—-there’s a requirement to lug more than a week’s food supply over generally strenuous terrain—the soggy nature of the camping area substrate, the variable nature of the weather which when inclement can be dismal, and the general lack of other trampers in huts makes carrying a tent surplus to requirements for all but the most hardcore.

Oh, camping on the short Rakiura Track is not such a bad idea,. The campsites all have a kitchen shelter, water, longdrop toilet, etc.

Almost at the top of the hill with big days either side of this hut, Mason Bay or East Ruggedy.

Great site perched over Big Bungeree Beach with a terrific view along the beach and out over Foveaux Strait.

The Cavalier Hunters Hut is a much modified Rakiura hunters’ hut. 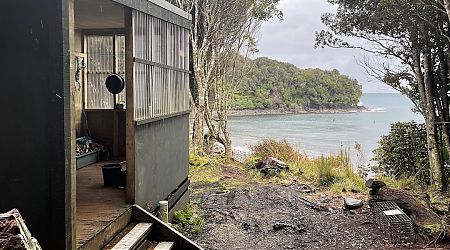 The 1970s Christmas Village hut is close to the bouldery beach in a small clearing but a long way from anything that might resemble a “village” in it’s usual definition.

At the Diprose Bay campsite it’s possible to find one levelish spot for a two person tent in this old cutting adjacent to the end of the tramline, but there’s not many alternative level, dry spots to whack up your tent.

For those with a sense of history there’s always this cave to sleep in.

If you want to feel remote and away from civilisation this is as good a spot as any. There are huts further south in NZ but only with boat access.

Just behind the East Ruggedy hut is a splendid grove of mature rimu trees with an understory carpet of Blechnum, ie, crown fern. Real nice.

Perched over the beach with an unobstructed view across Patterson Inlet/Whaka a Te Wera it’s great place to watch the colours change with the sunrise.

The hut is an increasingly large clearing adjacent to the extreme brown, ie, tannic, Freshwater River.

The Homestead Hunters Hut is another newish Stewart Island hunters’ hut. Not for use by casual trampers.

Maybe the most exciting hut location on the island, on a clearing near a cliff top, overlooking the ocean and looking over to Fiordland. A good opportunity to seek out that elusive kiwi, you can hear them in the evening.

six grassy camping sites away from any hut and near the beach, you will hear it crashing all night. Not much left of the nearby sawmill and school that closed down in 1931, just some rusting machinery.

Martins Creek Hunters Hut is not actually a DOC hut, this is a hut built and maintained by a group of hunting enthusiasts, the Rakiura Hunter Camp Trust. It’s not for use by casual trampers.

This 1970s hut, 15 minutes walk from the actual Mason Bay Beach, is the most acclaimed spot in NZ to get down with kiwis in their natural state. Plenty of people either fly onto the beach or do the walk from the water taxi dropoff at Freshwater Landing, so can have more patronage than some of the other huts.

Looking at a map you might initially think that the Mt Allen Lake, north end campsite is the obvious spot to camp at the midway point of the Tin Range route, but the reality is that the cleared area here is small and none too level.

The Mt Allen Lake, south end campsite is overall a larger and more sheltered spot to pitch your tent than the north end of the lake, but the reality is that the Twin Pools Crossing campsite is much more compelling. 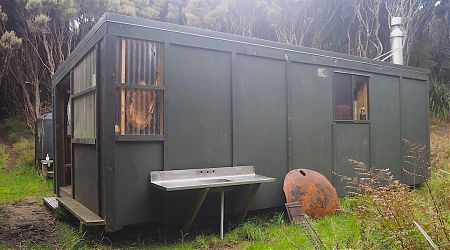 Murray Hunters Hut is another newish Stewart Island hunters’ hut. Not for use by casual trampers.

At the North Arm campsite, Port Pegasus, there’s some areas devoid of most low level vegetation where it’s possible to accommodate a tent, but in general the surface here is on a significant incline.

Sited above a beach—too shallow to swim, but it does reveal blue mussels at full low tide on the rocks—with a corker view over the inlet.

The old Homestead Hunters Hut is not so far from the new, and is in a non-habitable state.

Sited at the location of an early settlement from the 1870s, although little evidence remains except for the large gum trees.

An old style 1970s NZFS hut, the last remaining on the North West, or Southern Circuits, with the open fire replaced with a firebox, and surrounded by eight ancient, majestic macrocarpa trees. 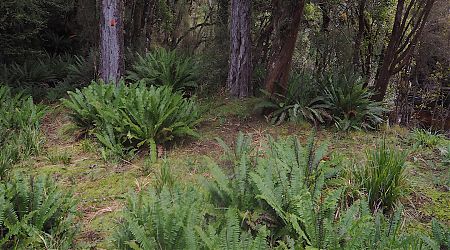 This delightful spot is about halfway on the eight-hour tramp between Doughboy and Rakeahua Huts, and that might be useful to know. 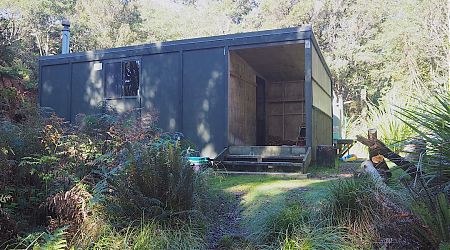 Smoky Hunters Hut is another newish Stewart Island hunters’ hut. Not for use by casual trampers.

Not much there in the way of amenities, but it is dry, and there is sufficient space for a few tents.

The biggest campsite in the Tin Range, but not so well located, close to the southern end of the route.

The best campsite in the Tin Range, but not so well located, close to the southern end of the route. At least it is mostly sheltered and there’s grass.

The Twin Pool Crossing campsite is most obvious camping site in the Tin Range, close to the halfway point of the route. Obvious because of the permanent water supply in the creek, you could even have a dip here on a warm day in a choice of plunge pools, combined with a flattish area that is mostly devoid of scrub and tussock covering.

The West Ruggedy Cave has to be one of the whackiest places to stay you could find, an open cave with an amazing view out to Codfish Island/Whenua Hou just out to the west.

On a small clearing overlooking the tidal Yankee River, that drains Mt Anglem/Hananui, with a short walk to the beach where you may see the famous yellow eyed penguins, the world’s rarest penguin.